We’ve identified 7 key areas that the fantasy football manager should strive to excel in. Once you have mastered these 7 Pillars of Success you will not only have significantly enhanced your fantasy football expertise levels but you will be able to use these skills to ensure that you are capable of challenging in every tournament you enter.

No matter which game operator you choose to play with its imperative that you try to ascertain the optimum playing formation to utilise. If you have read earlier sections relating to each of the 4 playing positions you will know that we carried out case studies which analysed the Mondogoal selection process. An additional novel feature that this operator has is the option to be able to export all player stats into a CSV file making player data comparisons even easier. This is a great tool and can be used as a starting point to devise and fine-tune a strategic approach that can be applied to all contests within their competition lobby. Mondogoal list players by starting position and the following table gives an overview of how each position performed during the 2014/15 English Premier League season: 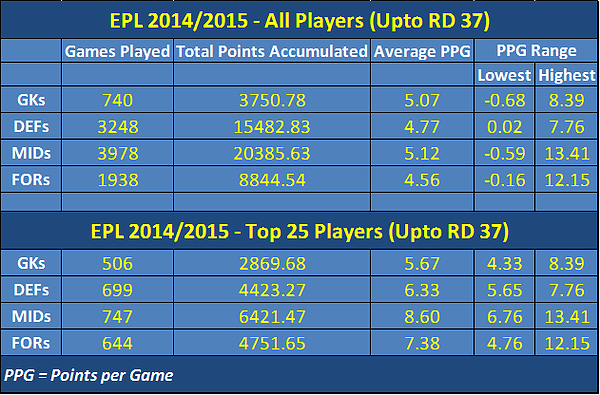 On observation it seems clear that midfielders and forwards have a greater potential for higher scores than defenders and goalkeepers under this particular scoring criteria. Since Mondogoal limit most contests to 4 selections per team a 3-man defence seems the way to go. Even if you favour the block defence approach you will still be able to accomplish this by using the goalkeeper as that 4th same team defender.  For this particular operator we recommend that you try to utilise a 343 or 352 formation. However, you should carry out a similar analysis for any game operator you choose to play with.

Playing time should never be under-estimated and we cover this subject in great detail in our Know your team news – how to become an authority on daily fantasy football and Keep that Scoreboard ticking so make sure you reference those. Mondogoal have indicated that they might introduce ‘late-swap’ functionality at some point in the future but until that happens it’s vital that you confirm your selections as late as possible prior to the first match in the contest to ensure that there are no last minute surprises. Always try to find players that will be in the starting line-ups!

Team goal expectancies will have a huge bearing on the scoring potential of your selected players for both defensive and offensive actions. With Mondogoal certain players are penalised if they concede more than 1 goal forfeiting any bonus points for clean sheets or single goal games at the same time. It’s a similar story for forwards. Let’s use Harry Kane as an example and we will assume that he scores around 40% of Tottenham’s goals. There’s a big difference between picking him in a home game versus Watford where Spurs might be expected to score over 2 goals as against picking him in an away game at Manchester United where Spurs goal expectancy might be around the 1 goal mark. When focusing on any game try to gauge its difficulty by using the bookmakers odds as a reference checker. Both Pillars of Success and Tools of the Trade discuss the subject of goal expectancies and you need to make it a pivotal part of your team building strategy if you intend to be successful. Read both articles carefully and you will soon get the gist of the projected goal ratings.

We’ve written a couple of strategy articles where we discuss players who may be under-valued. These include Jack of Trumps – the sleeper in the pack, and Playing formations and managerial incompetence – the nightmare scenario.  If you can isolate one or two of these they could be like gold-dust. Good examples include players who have had limited playing time, players who may frequently be played out of position due to their versatility and favourable game conditions where points expectancies might be higher than a player’s average.

Fantasy football managers love the thrill they experience when allocating their budget. However, you will find that daily fantasy football budgets are often a lot ‘tighter’ than what you may have experienced if you’ve played in traditional season-long contests so you might not be able to afford to include quite so many of the more expensive options in your team. Roughly the same fundamentals can be applied for all games regardless of operator. In the case of Mondogoal you are given £100m to spend on 11 players. That equates to roughly £9.1m per selection. It becomes a trade-off whereby you include more expensive options at the expense of cheaper purchases. Ahead of the ‘Handicapper’ offers further insights into player pricing.

Determining which players will be the designated set-piece takers is an essential component of the fantasy manager’s armoury. In addition to points for goals from penalties and free-kicks and points for assists many game operators also award points for shots on target and crosses. Familiarising yourself with these can be time consuming so we’ve provided you with an invaluable guide that list players who have been assigned set piece duties for both the English Premier League and the MLS. If you can keep up to date with these you might just weed out a few extra points that will keep you one step ahead of your competition. We also looked in detail at each club, highlighting what impact summer transfer deals might have as the season progresses, in Set Piece Takers – The Big 6, Set Piece Takers – The Safe Zone, Set Piece Takers – The Drop Zone and Deadline Day Addendum.

Our final piece of advice is to apply tactics that are applicable to your choice of contest. If you are playing in big field tournaments you will be looking for a well-balanced team but may take a chance on a few players who are capable of big points variations. This is well documented in Match Winning Ownership. In smaller field contests you may well go for more consistent types. For more advice on selecting a contest check out Fantasy Rising – Prepare and Prosper and for tips on possible adversaries feel free to reference our Don’t swim with the Sharks article. Daily fantasy football is still a learning curve for many so use sensible money management tactics while you find your feet.

If you can master these 7 Pearls of Wisdom there’s every reason to believe that you will be featuring on Daily Fantasy Football leader-boards on regular occasions!