In our latest teaser we put the emphasis on playing time and really cannot over-stress its importance and why it is something that all daily and seasonal fantasy football managers need to consider. You simply cannot afford to have talented players rotting in the stands or scratching their heels on the bench, so try to factor it in to your calculations.

The exact degree of importance will vary dependent upon the rules set out in your chosen game but if you can identify the appropriate player category for your potential picks, it may put you one step ahead of rival managers.

It’s obviously in your interest to pack your line-ups with as many nailed-on starters that are expected to play the full 90 minutes as possible. Goalkeepers and defenders tend to be less susceptible to the risk of substitution due to the fact they they are not expected to exert as much energy as players occupying more dynamic roles. Managers tend to be consistent in their decision making as well, making it quite easy to determine which players are unlikely to be pulled off at any stage of the game.

The great thing about this player group is that they will continue to contribute to their individual fantasy scoreboard, right up until the final whistle.

Some nailed-on starters are much more susceptible to the risk of substitution, making them one of the hardest groups to classify. They tend to be talented advanced midfield players, who clock up the kilometers during a match. Fantasy football managers, therefore, need to decide if they will justify their inclusion by outperforming similar players, who are perceived to be guaranteed more game minutes.

This calculation is not easy though, bearing in mind that in an article published in the Guardian in October 2013, a significant trend for late goals was identified by OPTA, with 15% of all goals scored since the Premier League era began occurring after the 79th minute of games. Given that there is a strong correlation between goals scored and fantasy points accumulated, fielding too many players that miss out on this precious time slot can have a detrimental effect on your overall chances of fantasy football success.

Some managers will chop and change certain individuals on a weekly basis. Including this type of player is a high risk strategy unless ‘late swap‘ is permitted in your chosen contest.

Fortunately, these players are fairly easy to spot. If a manager alters his formation a lot like, for example, Pep Guardiola, then the number of players at risk is likely to increase. If, on the other hand, he sets out his team in a standard formation such as the 4-2-3-1 Arsene Wenger sticks to so religiously, it may be easier to identify which players are more at risk of being rotated on a weekly basis.

There are a few players that have been labelled as ‘super-subs’ down the years but this player group really should be avoided at all costs by the fantasy football manager. 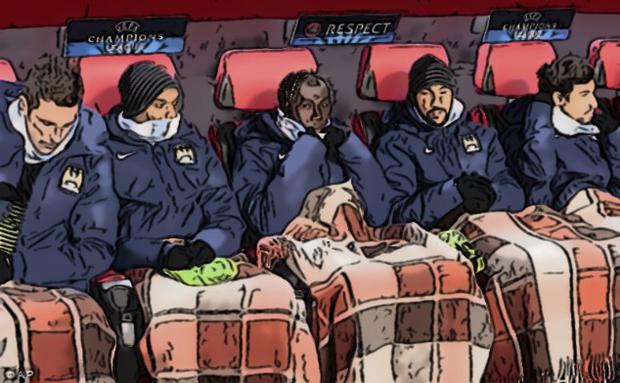 Even if they are introduced to the action, there is no guarantee to exactly how many game minutes they will get, making their fantasy points outlook bleak to say the least. Game minutes are crucial to give players the opportunity to accrue as many point-scoring actions or bonus points as possible.

This player group can be the downfall of many fantasy football managers that focus on seasonal games.

Prior to the start of the 2015/16 English Premier League season, Fabian Delph signed for Manchester City. Delph had averaged almost 87 minutes per appearance for Aston Villa in their 2014/15 campaign and clearly had the potential to average more points per game at City due to his new side’s additional firepower and defensive resolve. However, on a well-trodden path that followed in the footsteps of midfielders like James Milner, Trevor Sinclair, Sami Nasri and Jack Rodwell, Delph has failed miserably in his attempts to cement regular first team football.

Injuries have not helped his cause but Delph made just 8 Premier League starts in his first full season at the Etihad and is still looking for his first start in 2016/17.

Philippe Coutinho provides a great example of how a players form can dip following his return from an injury lay-off.

In the Oulala infographic below, it is clear for all to see how much worse Coutinho has performed since returning from the ankle injury that he sustained in November.

Coutinho would have been classed as a nailed-on starter with a high substitution risk prior to his injury but now his game minutes are even more questionable, with his game time dropping from a shade under 74 minutes per appearance in the first part of the season to less than 70 per game since returning.

Whether or not the player’s level may have dipped due to confidence doubts about his own personal fitness is open to debate but it is clear that they have been transmitted to his manager Jürgen Klopp, who now seems intent on protecting his star asset even further.

Once you have categorised each player, you need to make sure that you are right up to speed with any developing team news. There are number of resources at your disposal but Twitter is arguably the most important, while club pages and dedicated injury news sites can be worth their weight in gold.

Hopefully these tit-bits will give you an idea of some of the ‘playing time’ conundrums daily  and seasonal fantasy football managers face on a regular basis but one thing is assured – if you want to be successful you need to select players that keep their personal fantasy football scoreboard ticking over for as long as possible!

« I’m Only Human After All