Ahead of the ‘Handicapper’

If you read our ‘Jack of Trumps – sleeper in the pack’ article you will recall that we discussed synergies between horse-race handicapping and daily fantasy football. When the game operator assigns a market value to a particular player our goal as the fantasy football manager is to determine whether or not that player has been under-valued. If he has then we effectively have an ‘edge’ that we can use to our advantage at some point in the future, much the same as when a horse is ahead of the handicapper.

With just a month or so to go to the start of the new season ongoing transfer activity means many teams will line-up with a number of unfamiliar faces. It may take the game operator a number of weeks to get the full measure of some of these players but what you, the fantasy manager, need to do is to put yourself one step ahead of your rival managers. If you get some insightful research in now, compiling a list of players to watch it could pay-off in spades once the season unfolds!

So where do you start? The following graph illustrates the performance of the Top 20 Mondogoal ranked players (average points per game, minimum 10 appearances) going into the final round of 2014/15 EPL fixtures for each of the four playing positions. 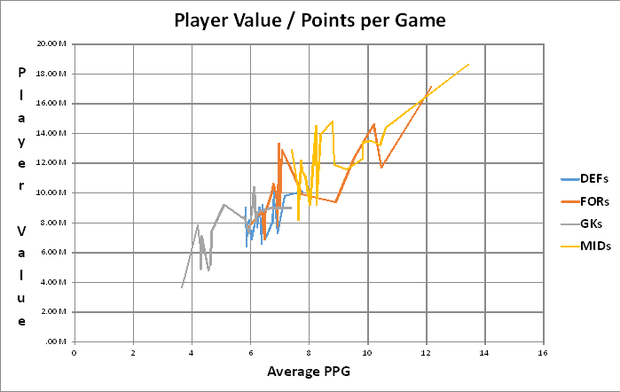 The graph clearly confirms that there is a strong relationship between the market value of players and the average points per game they earn. However, it also allows us to gauge what sort of valuation a player should be assigned if he’s averaging x points per game. We want to isolate players who we think can show improvement and then use this information to our advantage if they are subsequently under-valued by the operator. If you plot a hypothetical line through the mid-points of the scatter points for each of the four playing positions you can visualise a valuation for a player based on his expected points per game. For example, a midfielder averaging 8 PPG would most likely be valued around the £11m mark based on these projections..

To kick this off we will have a look at Liverpool. You could be mistaken for thinking that Brendan Rodgers was taking part in a Tesco trolley dash such was the ferocity with which he pursued his purchases. Whether he has been deluded or not or has pulled off some form of master stroke only time will tell but one thing is for sure, we have a new-look Liverpool to contend with and that presents a huge conundrum for fantasy managers. James Milner has been allocated the iconic ‘Number 7’ shirt so a starting berth should be assured but with Liverpool having an abundance of riches in the wide areas it may well be in a central midfield role. Having said that, with injuries to both Daniel Sturridge and Jordan Ibe and the impending sale of Raheem Sterling it wouldn’t be the biggest surprise to see him starting the season on the right. Milner had a closing valuation of £9.3m and only averaged 5.11 PPG last season. Clearly he needs a lot of improvement to fall into the ‘well-handicapped’ category. However, if he can average close to 8 PPG then that would equate to a valuation of around £11m so let’s look to see whether this is possible. 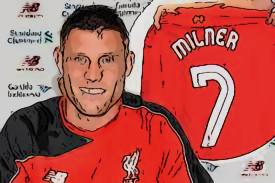 The first thing of note is the number of minutes Milner has accrued and WhoScored provide us with the perfect overview of his playing time. He accumulated 2334 minutes from 40 appearances in all competitions with 16 of these appearances coming as a substitute. That means he’s averaging just 58 minutes per game. If he can establish himself as a permanent fixture in the starting line-up then 80 minutes looks realistic which could easily see him push past the 7 PPG mark by keeping his personal scoreboard ticking over for longer. He’s also started in 7 different outfield positions which is stretching the word versatile to extremes but playing more centrally where he can use his strong tackling to good effect could see him flourish. He also has a ferocious shot and with Gerrard gone he could share set-piece responsibilities with the Brazilian duo which might just enable him to eke that other extra point we’re looking for. There’s no guarantee that Mondogoal won’t bump his valuation up either but he is one for the short-list nevertheless.

Playing time is not the only variable to consider. For all goalkeepers, defenders (and even midfielders) that move clubs you will need to factor in the likely impact on any bonus points that may be accrued due to clean sheets and single goal games. Is there a big difference between goals expectations per game (attack and defence) at their new club compared with their former club? For instance, Keiran Trippier from Burnley to Spurs looks an obvious case in point but remarkably both sides conceded the same number of goals last season!

Remember to look at our other stats articles to improve your understanding of the intricacies of the various scoring systems – this should enable you to pinpoint key areas to focus on as you look to unearth a few hidden gems.

If you can get one step ahead of the handicapper now you might just find yourself in the winner’s enclosure more often!