Manchester United’s FA Cup exit at the hands of Arsenal confirmed that they will finish the season empty-handed. In the wake of this, Alistair Tweedale produced an intriguing article for whoscored focusing on the deployment of Angel Di Maria.

The ratings indicated that his form suffered as a result of Louis Van Gaal’s constant tinkering and the coverage illustrates his effectiveness in various positions. However, it’s not just Di Maria who has been constantly played out of position this season.

Wayne Rooney had a 10 game run where he was played in a deeper midfield role, the Premier League games from Liverpool (H) to Burnley (H), culminating in fans and pundits alike scratching their heads in disbelief. 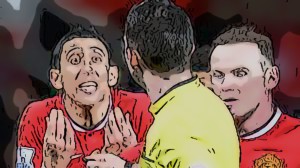 In Di Maria’s case it could be argued that Van Gaal’s summer transfer business resulted in the squad becoming too lopsided bearing in mind that Shaw, Blind and Rojo can all play a left-sided role and neither Herrera nor Falcao offer much down the right flank. With the extravagant wages Falcao is rumoured to be earning Van Gaal probably felt that he needed to find a way to accommodate Rooney, Van Persie and the Colombian as well.

Due to the nature of daily fantasy football contests managers won’t always have the luxury of knowing the starting formations for every team beforehand so what we want to do here is to ascertain what the repercussions are for fantasy managers who select players who are then subsequently played out of position. It’s not just about goals and assists though, remember fantasy points can be earned for general play, including the likes of interceptions and player discipline.

For the purpose of this exercise we’ll use the Mondogoal scoring system and try to gauge what impact Van Gaal’s playing formations have had on the fantasy performance of the two aforementioned players.

For Di Maria we have isolated the appearances where he has not been played in his natural central or left sided midfield role where he can use his devastating turn of speed to such good effect. His other appearances have been classified as out of position, likewise for Rooney, for that 10 game run mentioned earlier.

The United boss will no doubt argue that his team still achieved a result in many of these games but for a fantasy manager there is only one conclusion – purchasing high value players who are then subsequently played out of position could have a detrimental effect on your chances of ‘cashing’ in a daily fantasy football contest.

If there is uncertainty about exactly where a key player may start then perhaps its better to avoid these picks altogether or at least utilise all available resources. It’s worth recapping that there are some great journalists out there who are an authority on likely team news!