When you place a bet on daily fantasy football I think it is fair to say that the end user engagement entertainment levels are much higher than for traditional wagers. The reason for this is that when you hand-pick your selections you develop a sense of togetherness with the players you draft. This gives a consumer terrific value for money even if it’s only for a small outlay or no entrance fee at all.

The process can start days or weeks before the contest gets under way which really gives a level of customer interaction that is unparalleled. So where do you start?

Well, the first thing to look at is the gameweek deadline or the cut-off time for the particular contest you intend participating in.

(1) A gameweek deadline that is 1 hour before the first match in a game round, meaning that you will not be privy to any confirmed line-ups. In the Premier League, for instance, Starting XIs are always released exactly 1 hour before kick-off.

(2) A gameweek deadline that is close to the kick-off of the first match or set of matches in a contest.

Now, in the first case it is clear that you will have to attempt to predict the starting line-ups yourself, whereas in the other 2 instances, you are allowed a certain degree of flexibility due to the fact that you will have access to some confirmed line-ups.

Remember – if your chosen players are not on the pitch, they will not be scoring any fantasy points for you!

However, regardless of what contest you are playing in, it is in your interest to become an authority on team news so that you can gain an edge on rival managers. It is therefore imperative that you make the best use of available resources with good sources being the key.

To do this successfully you need to build up your own list of websites that you TRUST or have access to other media channels that may provide invaluable insight.

The fantasy football community are privileged to have one man who is dedicated to providing just this sort of information on a daily basis and his ‘Premier Injuries’ website is a great place to start. He’s also very active on Twitter, where he is always more than happy to respond to any queries via his @BenDinnery handle. 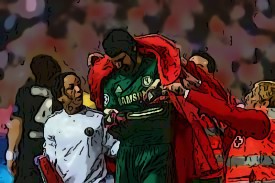 Suspension information is also included but you might also want to factor in players that are walking the suspension tightrope as well – players that are one card away from a ban. Be aware of upcoming fixtures. Many players will take a ‘soft’ card to sit out an innocuous fixture to free themselves up for a more important game. Check this trend out for the ‘El Clásico‘ when it’s next on the horizon. Including these guys in your team a couple of weeks before such fixtures could mean unnecessary negative points, while their club managers might also be reluctant to play them, if one further caution could result in them being unavailable for that much more important fixture!

You will also need to think like a manager. Don’t get stuck with players who get rotated a lot especially for league games immediately before or after key Champions League fixtures. This is particularly important when you enter a contest where the kick-off times are staggered. Many sites don’t allow for ‘late swap’ functionality meaning once the first game in the contest gets under way your line-up will be fixed.

The more knowledgeable newspapers usually have decent previews with projected line-ups 24 hours or so before the game but you will need to weed out the wheat from the chaff so that you’re bang in the picture regarding likely starters and those players that might be 50-50 who you might have been considering for inclusion in your team.

Part of the fun is working out which ones are more of an authority yourself. Club websites can be useful as well as club and players personal twitter feeds. On match day listen in to sports radio and TV channels and keep an eye on news feeds for late news on any players that might not travel.

Now, you have probably realised by now that there will be loads of information to digest, so you need a strategy in place that will enure that you stay on top of all this content.

This is where twitter lists can really come in really handy. You can set up your own or subscribe to others that have been set up by other twitter users who are avid fantasy football players.

Let’s say you are interested in Leicester City. You could easily create a list just for Leicester City that might include one or two local journalists who focus their activities solely on the club, players’ personal twitter profiles, any dedicated Leicester City TV stations and so on. They will take a bit of setting up but if you are unsure about a player for a specific match, you can then hit that timeline for all the latest tweets to see if any new material has emerged.

Whatever your reasons for playing, whether it be bragging rights with your friends, leader-board recognition or the monetary gains on offer, keeping up to date with all developing team news will give you the best possible chance of success!

Return of the Jedi »