How to stand out from the crowd and claim tournament glory

Ownership statistics are often touted about by daily fantasy sports players and the general consensus is that you should look to isolate a couple of low-owned players in big field tournaments to make your entry stand out from the competition and give yourself a better chance of taking down the top prize.

However, finding these players is no easy task and will take a bit of research on your part but as the saying goes hard work will pay off in the end. Most players will have a projected points range based on their previous performances and from this data it is possible to calculate their average points per game and the standard deviation that goes with it. The latter is a great indicator of how consistent or erratic a player is and the lower the figure the more reliable the player is likely to be. On Mondogoal it is possible to see the number of points gained in a player’s last 20 games and substitute appearances are marked accordingly (International appearances are included). This means it is possible to rank players by average points per start and record a standard deviation figure for that data set.

Let’s look at the latest 20 games played by the top ranked player for each position based on closing Mondogoal salary caps in the 2014/15 English Premier League season:

Due to the nature of the scoring criteria, it is players whose scoring is heavily influenced by goals, assists and shots on target that are likely to have the biggest scoring discrepancies. If a defender was to fall into this category you can rest assured that it would be common knowledge. He would have to be taking a high number of free kicks and penalties or be misclassified and actually be playing in a more advanced role. So you need to focus your attention on forwards and midfielders and try to isolate players who are capable of racking up some points and have a high standard deviation. Part of the appeal of daily fantasy football is profiling players, so although it is time consuming the rewards can be handsome in the long run. The idea is to build your list gradually and then to strike when game conditions are favourable.

The following contains a sample list of potential ‘under the radar’ types with contrasts against more recognised names: 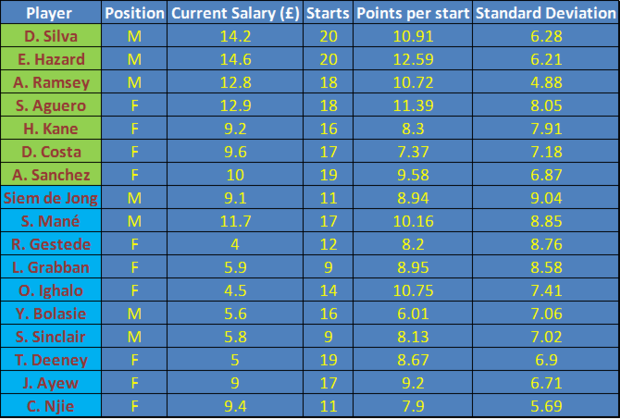 Sadio Mané missed out on a move to Old Trafford but has proven his Premier League credentials and will surely deliver at some point but there are doubts about many of the others and with the season still in its infancy, some still need to prove that they can make the transition from the Championship or overseas leagues while others have had restricted playing time due to injuries or lack of opportunities. 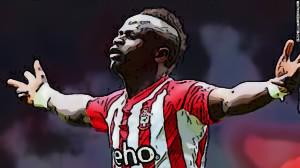 It is up to you as the daily fantasy football manager to determine whether they are capable of repeating what they have achieved in the past. Use your own judgement but also reference sites such as WhoScored who not only profile and rate players for each performance but also produce insightful player focus articles that can be of great help.

Once you’ve identified a player that ticks the right boxes the next step is to wait for the right opportunity. Familiarise yourself with our 7 key fundamentals to daily fantasy football success and specifically the significance of goal expectancies so that you are targeting players that will have favourable match conditions. Remember the importance of confirming that they will start especially if they are ‘fringe’ players.

Lewis Grabban has some bridge building to do at Carrow Road to get himself back in favour but if he does manage to earn a start in any upcoming, attractive home fixture for the Canaries he could be the feather in your cap that tips a GPP in your favour!

« Nothing ‘Boring’ about a dependable Morgan