The Cherries are there for the picking

There’s another £10k worth of prize money up for grabs this weekend at Mondogoal in their Premier League Shootout contest which features 7 of Saturday’s 8 matches so we’ve formulated the basis of a plan with the aim being to take down top spot.

Despite a poor start to the season that sees Chelsea languishing 10 points behind the leaders both Eden Hazard and Cesc Fàbregas are still ranking amongst the Top 3 midfielders for points earned for consistency. Mourinho’s team won’t get many better chances to steady the ship than against an out of sorts Villa side so both are included. Manchester United have a tough looking trip to Goodison Park to contend with and need to bounce back from their mauling at the Emirates but Anthony Martial, priced at just £5m and with the 2nd best minute per goal ratio this season behind the injured Sergio Agüero, is hard to pass over so we’re happy to take a chance on him. 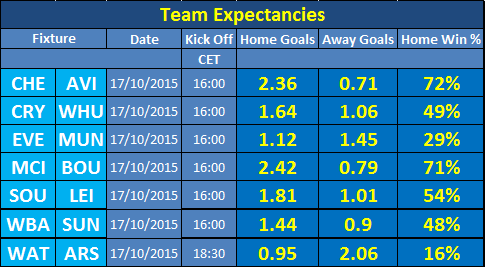 If you read our preliminary article, posted earlier this week, you will recall that we were toying with the idea of using a block defence strategy with the Baggies rear-guard very much in our focus. We are happy to stick with this policy in the hope that we can secure that elusive clean sheet. Craig Dawson is one of the players who seems to be benefiting from a small nerf the operators made to the scoring system which sees defenders being awarded 0.25 points (from 0.05) per interception. The other significant change from last season is that fouls are less severely punished now having been adjusted down from 1 point for each to 0.5 points. We’ll be monitoring the Johnny Evans injury situation but he has been provisionally included along with Gareth McAuley and goalkeeper Boaz Myhill.

We’re expecting an avalanche of goals when the Foxes visit St Mary’s but have decided to swerve going too gung-ho on Southampton, mainly because of the International break in which quite a few of the Saints players were heavily involved. Dusan Tadic and Graziano Pellè are selected though. 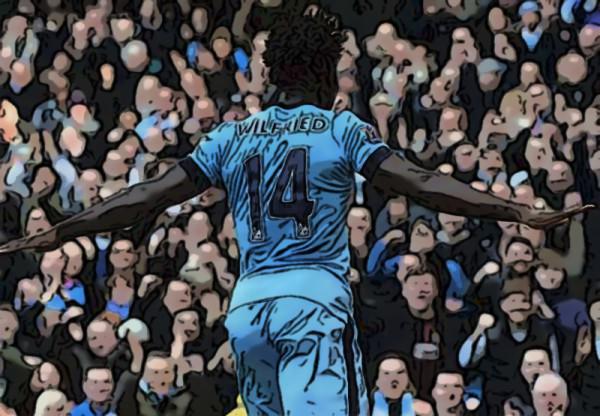 Table-topping Manchester City have a crippling injury list to contend with but one player who will be hoping to make the most of his opportunity is Wilfried Bony. Based on the bookmakers projected goal expectancies the Cherries are there for the picking this weekend and we’re banking on Ivory Coast hitman Bony to get his fill along with team-mate Kevin De Bruyne. We’re expecting the Belgian to run the show here in the absence of David Silva and he can build on the impressive start he has made to his Sky Blues career as highlighted in this Ben McAleer piece for WhoScored.

Remember you can edit your submitted line-ups anytime up to kick-off so make use of that feature once official team news is announced. Evans and Tadic are perhaps the most vulnerable and will be replaced if necessary – always choose players that are confirmed starters! 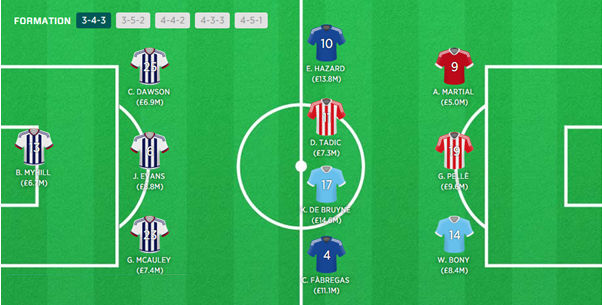 « Bony to feast as opportunity knocks ?

The Power of the Review »