Bony to feast as opportunity knocks ?

Sergio Agüero could miss as many as seven games for Manchester City following a hamstring injury that he sustained on international duty. The 27-year-old was stretchered off during the first half of Argentina’s 2-0 defeat to Ecuador last week.

It had appeared that the prolific striker was back to his very best after netting five goals in a 20-minute spell during Manchester City’s 6-1 win over Newcastle before the international break.

The news that Manuel Pellegrini with be without his star striker for a prolonged spell will not go down well with the Chilean, especially looking at his minutes per goal ratio.

Fantasy Football game www.oulala.com have taken a look at the Premier League’s top marksman and have revealed the top ten players with the best minutes per goal ratio’s so far this season.

Thanks to his five-star display against Newcastle, Agüero leads the way. The Argentine has averaged a goal every 91 minutes this season after scoring 6 goals in 545 minutes of action. 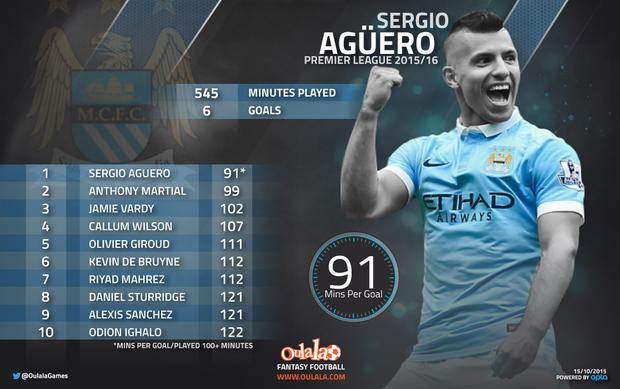 Anthony Martial may have only played 296 minutes for Manchester United since joining from AS Monaco but with three goals already it’s enough to see the 19-year-old take second spot with a goal at an average of every 99 minutes.

The Premier League’s top scorer, Leicester City’s Jamie Vardy, has netted seven goals this season. However playing 711 minutes of league football, he has found the net, on average, every 102 minutes. Enough to put him in third place.

Surprisingly, Arsenal’s Olivier Giroud has done enough to make it into the top five with an average of a goal every 111 minutes. The Frenchman has had to make do with playing second fiddle to Theo Walcott who has taken an average of 219 minutes to score his two goals, putting him all the way down in 40th place.

Agüero’s absence will be a big blow for Manchester City. His replacement Wilfried Bony netted 11 goals in 1,607 minutes for both Swansea and Manchester City in the Premier League last season at a rate of a goal every 146 minutes.

Can the Ivorian fill Agüero’s boots? or will Manchester City’s title charge suffer a big dent with the Argentine missing from action?

« Jogging James needs to G up

The Cherries are there for the picking »