This Mondogoal case study will provide tips on how to evaluate which daily fantasy football midfielders offer the best value for money by looking at the various skill segments which contribute to their fantasy points production.

In the previous section, we eulogised Paul Scholes, a player that many recognised as the complete midfielder. However, tackling ability was perhaps the only weakness in Paul Scholes’s repertoire resulting in some needless cautions from time to time so we were a little surprised that ‘tackles won’ was not included in the Mondogoal’s scoring matrix for midfielders but apart from that we have no objections. We’ve categorized points scoring for this specific position into sectors as follows:

In the following pie charts, we have aggregated general play and discipline to make up a consistency rating (CON) and have compared this against all the other skill areas midfielders can earn points for. They cover ALL games played during the 2014/15 EPL season up to and including Week 37 and the Top 25 players based on average points per game.

When we start to look closely at the engine room it becomes obvious that money management is really starting to come to the fore. We need to accommodate 4 or 5 players depending on our chosen formation so we need to work out the best way to achieve this. The following table shows in more detail the exact splits for each of the Top 20 performing midfielders up to and including Week 37 (Min 10 appearances, 2014/15 EPL): 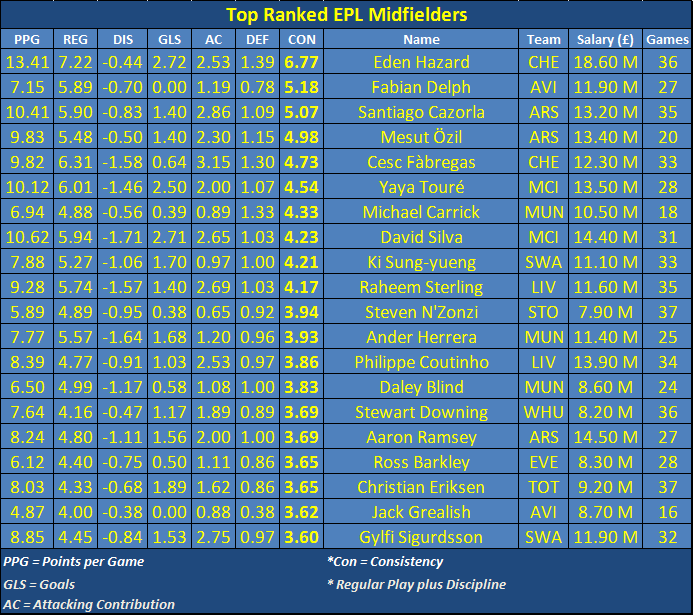 Dissecting the distribution of points for the various skill areas of whichever game operator you choose to play with enables you to come up with a strategy for selecting your key midfielders. In the case of Mondogoal, it is clear that regular play has a huge influence on a midfielder’s performance.

It is outperforming both ‘goals scored’ and ‘attacking contribution’. In the case of Eden Hazard, he has excellent dribbling ability which enables him to draw fouls and coupled with the fact that he is a well-disciplined player results in a consistency rating that comprises almost half of his average points. This is repeatable but if you decide to use such a big portion of your budget on one player sacrifices will have to be made elsewhere. The following graph gives you a good overview of expected points per game against the salary cap: 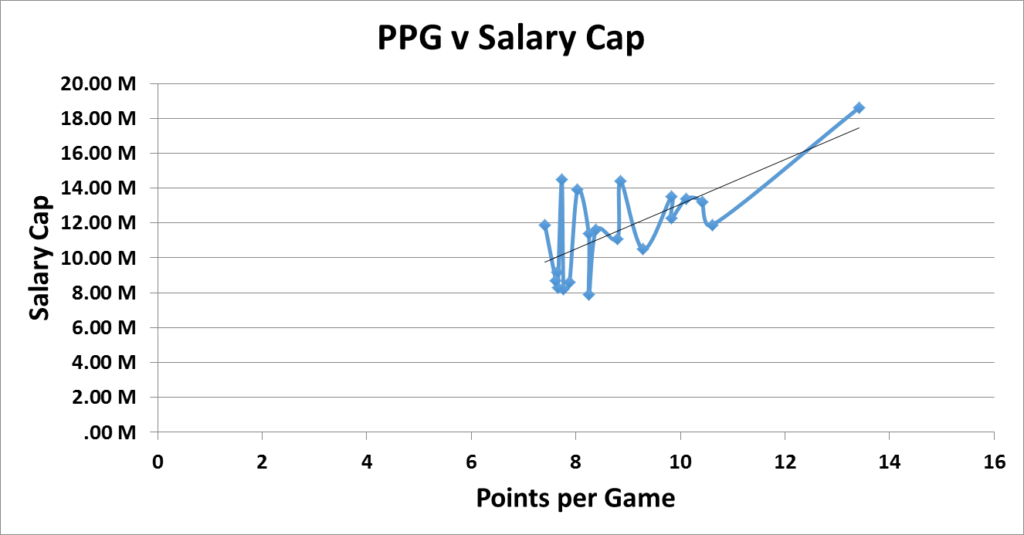 The key to midfield selection lies in combining the ratings with the contest fixtures themselves. Consider these points when making your picks:

On a side note, it will take a few weeks for the new season to bed in and for ratings to be collated accordingly so you might want to use last season’s statistics during this overlap period.

Now it’s time to look at the goal machines!

How to select your daily fantasy football forwards