Willian has earned the arm-band

Earlier this week we spoke about fading Mesut Özil and Riyad Mahrez due to the severity of their fixture. We also mentioned that Fanaments have acquired a UK Gambling Commission licence, so we thought we would build a line-up for their English Premier League freeroll contest that includes all fixtures scheduled for the 13th January. Formations are flexible and you must nominate a captain who will earn double points in your 11 man line-up from the stipulated budget.

Sergio Agüero and Harry Kane will spearhead our attack where they will be joined by André Ayew, who is likely to play in a more advanced role for the Swans.

Chelsea seem to have steadied the ship of late and they could be in for a prosperous evening when they entertain West Bromwich Albion. Willian has been their standout performer this season, so he gets our arm-band vote. His team-mate Cesc Fàbregas is included as well as Tottenham’s impressive Dele Alli and Kevin De Buyne of Manchester City. 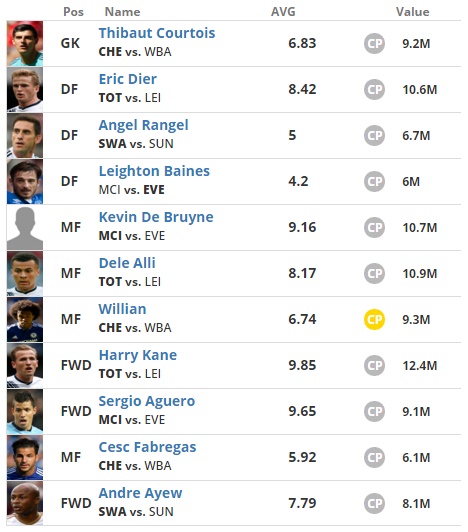 Eric Dier offers an aerial threat from set-piece situations and has been deployed in a midfield role all season, even though he is categorised as a defender by many operators, including Fanaments. Leighton Baines has a few games under his belt now and might be worth chancing for his prowess in dead ball situations while Angel Rangel may pick up a few points against Sunderland.

Thibaut Courtois looks a good choice between the sticks and completes the line-up.

Freerolls are a great way to learn about a new operator so give Fanaments a try. We don’t think you will be disappointed!