Is this the right time to fade Mesut Özil and Riyad Mahrez ?

Mesut Özil and Riyad Mahrez have been the standout performers in the first half of the season, making it almost impossible for daily fantasy football managers to ignore them. Likewise, Jamie Vardy and Romelu Lukaku, both currently in the treatment room, have been leading the way in the goalscoring charts and consequently find themselves included on many fantasy soccer team sheets.

If you are familiar with our game difficulty tables you will know that we project the expected number of goals for each team based on bookmakers odds. Here are the expectations for Game Week 21. 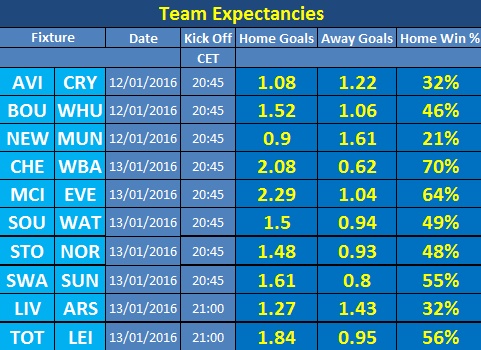 Now it’s worth noting that each daily fantasy football operator will have his own set of rules. Goals and assists will always be valuable but in some formats they may be even more or even less significant, depending on how complex the scoring is.

Let’s use Fanaments, who have recently acquired a UK licence, as an example to assess the merits of Özil and Mahrez for their respective fixtures. In the German’s case 56.5% of his points have been accrued from goals and assists while the Algerian, WhoScored’s highest rated Premier League player this season, weighs in even higher at 60.5%. Simply put – the more goals their respective teams are expected to score, the more points they will most likely earn. The trend is even stronger for Everton’s Belgian striker with over 64% of his points earned from goals and assists. However, if the fixture list presents them with difficult opponents the opposite will be the case.

Everton travel to Manchester City, Arsenal go to Liverpool while Leicester City have another trip to White Hart Lane to contend with. Will the aforementioned players perform to their usual standard (average fantasy points per game) based on these projections in Game Week 21? The answer has to be probably not.

Of course, these are just projections and they are all capable of scoring points if fit and healthy, but on this occasion it might make sense to pass them over and look for better value alternatives!