Jose Mourinho rarely gets it wrong in the transfer market. The astute signings of Cesc Fabregas and Diego Costa proved to be the difference last season as Chelsea went on to win both the Premier League and League Cup.

Many of Chelsea’s star players have under-performed, leaving the club languishing just above the relegation zone, out of the League Cup and with rumours circulating that Mourinho may be one defeat away from saying goodbye to Chelsea for a second time.

While Chelsea struggle, both Manchester United and Manchester City have started the season well. The pair are riding high and, alongside Arsenal, appear to be part of a trio most likely to battle for the Premier League this season.

Oulala’s stats show that since the beginning of 2014, both Mata and De Bruyne have been far more productive at their new clubs than Oscar has at Chelsea after the pair departed. 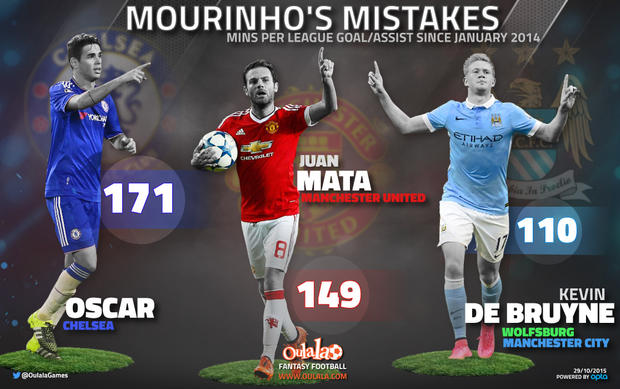 On a per minute basis Oulala’s stats have revealed that it has taken Oscar an average of 171 minutes to either score or assist in the Premier League for Chelsea since January 2014.

In contrast, Mata has taken an average of 149 minutes to net a goal or assist a team-mate in the Premier League since his move to Manchester United.

Oulala’s stats go on to show that in spells at Wolfsburg in the Bundesliga and Manchester City in the Premier League, Belgian international Kevin De Bruyne has surpassed both players, taking just 110 minutes to score or assist at either club since leaving Chelsea.

The figures bring up many questions if Mourinho has decided to keep both Mata and De Bruyne at Chelsea.

Would the club be in its current turmoil?