This weekend’s Mondogoal £10k Shootout sees all 6 matches kicking off simultaneously at 16:00 CET so there should be no concerns about starting line-ups. You can simply edit your selections once official team news is announced, so we suggest that you have some standby players ready to cover for all eventualities. Earlier this week in Entering the Red Zone we hypothesised that Arsene Wenger, Louis van Gaal and Manuel Pellegrini might have one eye on their respective upcoming Champions League ties and will therefore look to keep their star players as fresh as possible for those encounters. We think there’s a good chance that they could be subbed out early, around the 60 minute mark so we’ve decided to fade attacking players from all three of these sides this weekend despite their high goals expectancies.

We have, however, stacked our defence with Manchester City players and will be looking for a clean sheet here against Norwich City. Vincent Kompany, Aleksandar Kolarov, Bacary Sagna and Joe Hart are all included in our team of the week.

Away sides have been performing remarkably well so far this season with their win percentage around 37%, a 7% increase on last season and their average goals scored at a healthy 1.30 compared with 1.09 in 2014/15. We are going to take a chance on this pattern continuing and have plumped for the impressive Leicester City duo of Jamie Vardy and Riyad Mahrez as well as Dimitri Payet, Victor Moses and Diafra Sakho of West Ham United.

Newcastle United will be looking to bounce back from a poor showing in the Tyne-Wear derby, a game in which they once again had their defensive frailties exposed as highlighted in a recent WhoScored article by Ben McAleer. We are prepared to take a chance on Georginio Wijnaldum hitting the heights again back on home soil and have also included Ayoze Pérez.

Including 5 players from visiting teams is a bit of a gamble but with £10k in prize money up for grabs, for just a £3 buy-in and the top 775 places in a potential field of 3700 finishing in the cash we’re hoping it will pay off! 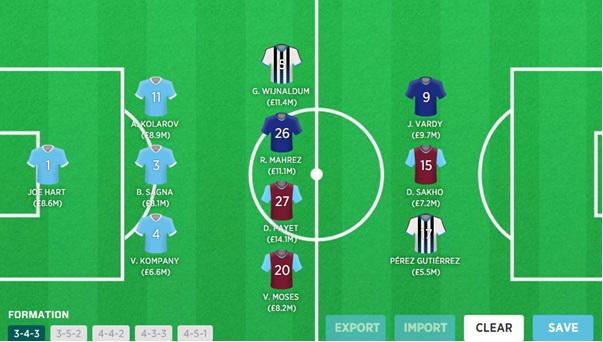