Fantasy football game www.oulala.com boasts the most sophisticated scoring matrix in fantasy football, which comprises 70 different statistical criteria sourced straight from Opta. The ideal platform in identifying the overall performance of a player.

In November, Everton duo Ross Barkley and Romelu Lukaku were Oulala’s top Premier League points scorers. Both players were exceptional throughout the month and the stats back it up.

Everton went unbeaten during the month, registering victories over both Sunderland and Aston Villa, while also picking up draws against West Ham and Bournemouth. In their four games, the side scored a total of 14 goals. Combined, Barkley and Lukaku put away eight of those. 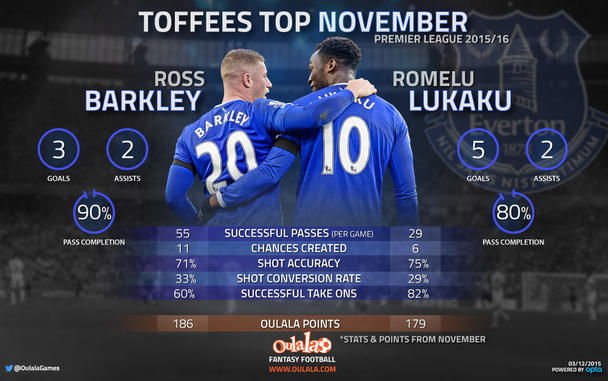 In November Barkley scored three goals and provided a further two assists. The England international completed an average of 55 successful passes per game at an accuracy of 90 per cent. He created 11 chances and converted 33 per cent of his shots into goals. The 21-year-old registered 186 points over the four games and was Oulala’s top Premier League points scorer for the month.

Lukaku was just as impressive. The 22-year-old was the Premier League’s top goal scorer in November with five goals. The Belgian had 17 shots, with 75 per cent on target. He completed 82 per cent of his attempted dribbles, created six chances and registered two assists. While his passing accuracy averaged 80 per cent. Lukaku tallied a total of 179 points on Oulala in November, just seven points fewer than his team-mate.

The last Everton player to win Player of the Month was Marouane Fellaini in November 2012. Three years on, Oulala predict that either of Ross Barkley or Romelu Lukaku will collect the award.

« Hazard not the only one lacking punch