What a difference a game makes. From Rodgers outcast to Klopp hero, Lucas Leiva has become an important feature in Liverpool’s recent resurgence.

Lucas ranks second on Oulala’s list with 41 tackles won. He is pipped to the post by Dutchman Erik Pieters with 43. However, what makes the Brazillian’s stat even more impressive is that unlike Pieters, Lucas has played three games less.

After not featuring in Liverpool’s opening two games of the season it looked like Lucas was on his way out of Anfield and on the verge of signing a deal with Turkish side Besiktas. However, a chance injury from Jordan Henderson brought Lucas back into the side in a 0-0 draw against Arsenal. Credit must be given to Rodgers for bringing the 28-yr-old back into the team. From then on the Brazillian has gone from strength-to-strength and has arguably been one of Liverpool’s finest performers under Jurgen Klopp.

Oulala’s stats show that Lucas has the highest rate of tackles per game (4.5) for EPL players that have featured in 5+ matches. 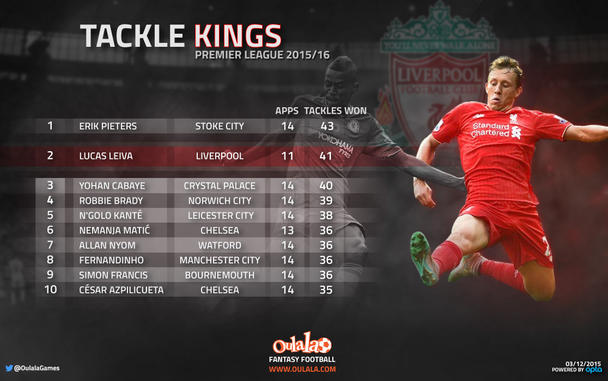 Nemanja Matic, Allan Nyom, Fernandinho and Simon Francis all have the same number of games and tackles made. However from those four, Matic has played the least number of minutes with 967 which is why he ranks above them. Completing the list is another Chelsea player, Spain international Cesar Azpilicueta, with 35 tackles made. Oulala’s stats show that Bournemouth’s Francis ranks just above Azpilicueta. Chelsea’s next game is at home against Bournemouth. Having gained some momentum, Chelsea will be heavy favourites.

Other players in the list whose teams face each other this weekend are Brady of Norwich City and Nyom of Watford.

As mentioned, Stoke City’s Pieters tops the list ahead of Lucas. Liverpool and Stoke are to go head-to-head in a double Capital One Cup semi-final. Should the two in question be fit, it promises to be a clash full of crunching tackles with a lot at stake.