Hazard not the only one lacking punch

Are Chelsea better off without Diego Costa? Is Eden Hazard the answer?

Stats from fantasy football game www.oulala.com have revealed the top five Premier League players that have taken the most shots without registering a single goal this season.

Eden Hazard ranks fourth on Oulala’s list. The Belgian has taken 19 shots without scoring, a figure eclipsed by just three other players.

Crystal Palace’s Jason Puncheon tops the table with 27 shots. However, has failed to find the back of the net. Arsenal’s Santi Cazorla has taken 23 shots, but is still yet to register a goal this season. While Watford’s Étienne Capoue has taken 21 shots with nothing to show for his efforts. 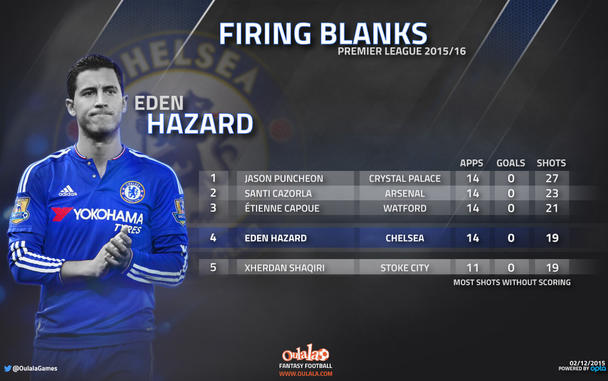 Hazard had two shots in Chelsea’s 0-0 draw against Spurs last weekend. Only one was on target. Of the Belgian’s 19 shots overall, only 38 per cent have found the target. Surprisingly, as many as 10 Chelsea players have enjoyed a better shot accuracy than the 24-year-old.

In contrast, Diego Costa’s attacking stats are an improvement on Hazard’s. The Spaniard has scored three goals from 23 shots, with an accuracy of 53 per cent.

Eden Hazard has now gone 17 league games without finding a goal, a run lasting 1,575 minutes. His last Premier League goal came against Crystal Palace at the start of May. The Belgian headed past Palace’s Julian Speroni after the keeper had saved his initial penalty. It was the only goal of the game but was enough to secure Chelsea the league title last season.

Chelsea welcome Bournemouth to Stamford Bridge on Saturday. Will Jose Mourinho use Hazard in the false number nine role once again? After Diego Costa’s bib-throwing antics, does he have any choice than to snub the Spanish striker?