The Battle of the Big Men

Premier League action in the New Year kicks off with what promises to be a real cracker as West Ham United entertain Liverpool. Even though the Hammers have home advantage and there is just one point between the two sides at the midpoint of the season the bookmakers have made the visitors clear favourites for this with almost 1/2th a goal advantage. This is a significant piece of information for anyone looking to get involved in FanTeam’s daily fantasy football 5 a-side contests where you cannot select more than 4 players from either side with your $50m budget.

Dimitri Payet is back in training and would be an obvious choice for inclusion if fully fit but he’s unlikely to be risked in what is sure to be a physical encounter while Andy Carroll will be looking to put one over his former club. However, we prefer Christian Benteke, who got the winner at Sunderland, putting in a much-improved effort in the process and he will spearhead our line-up. His work-rate has been the subject of much criticism and this fixture gives him another chance to prove to both Klopp and the fans that he can cut the mustard at the highest level. 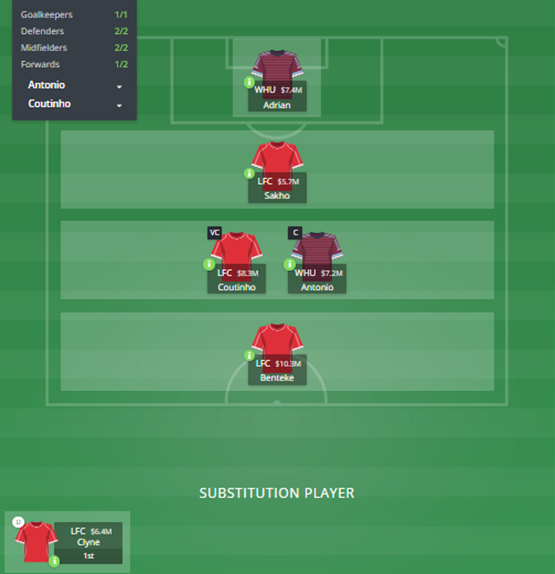 Adrián saved 3 consecutive penalties last season and that stat alone is enough to give him the nod between the sticks with spot-kick saves being handsomely rewarded in this game format. With doubts surrounding Aaron Cresswell’s fitness, we have decided to opt for Mamadou Sakho in defence, who has contributed to Liverpool’s back-to-back clean sheets.

We’ve also selected Coutinho, who is sure to be a popular captaincy choice and is the highest scoring player available. However, we’ve overlooked him for the arm-band and have given that honour to Michail Antonio with a true contrarian play, as we attempt to differentiate our line-up from the opposition. The former Nottingham Forest wide-man has the pace to get on any Andy Carroll knock downs that come his way. Nathaniel Clyne gets the spot on the bench.

Give 5 a-side daily fantasy football a try – it’s a great way to start the New Year.