Memphis Depay, will struggle on his return to former club, PSV Eindhoven, in the Champions League on Tuesday. Those are the words of former Eindhoven coach Aad de Mos.

De Mos has been far from impressed by Manchester United this season and has backed Depay’s former team-mate, Santiago Arias, to get the better of the Dutchman.

Louis van Gaal replaced Depay with Ashley Young at half-time after he failed to trouble Nathaniel Clyne during United’s 3-1 win over Liverpool on Saturday.

Young made an immediate impact at the start of the second-half winning a free-kick as a result of a foul from Clyne. Daley Blind netted the game’s openign goal from the set-piece.

Opta-powered fantasy football game www.oulala.com have taken a closer look at what areas Depay has struggled with since his switch to Manchester United and where the 21-year-old has improved. 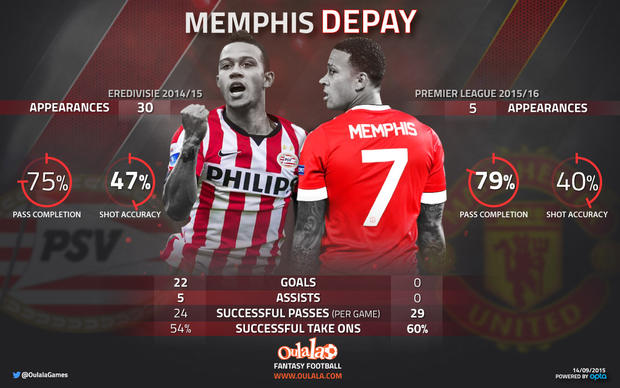 The Dutchman is yet to register either a goal or an assist in the Premier League this season, a far cry from his 22 goals and 5 assists in the Eredivisie last season.

Manchester United have registered a superior pass completion (85% to 82%) and better possession (59% to 53%) this season than Eindhoven did last term. A feasible explanation for Depay’s improvement for ball retention.

The Dutchman’s passing stats have significantly improved for his new club. Depay has averaged more successful passes per game in his opening five league games for his new club (29 to 24). He has also successfully completed a higher percentage of the passes he has attempted (79% to 75%).

While the 21-year-old’s shot accuracy is down (47% to 40%), he is currently performing better for take-ons, successfully completing a higher percentage attempted for Manchester United this season than he did for PSV last term (60% to 54%).

PSV warmed up for Tuesday’s group game against United with an emphatic 6-0 rout away to SC Cambuur on Saturday and are still unbeaten in the Eredivisie this season.

Will Depay return to the Philips Stadium with a PSV-esque performance or will his struggles at Manchester United continue?