Nothing ‘Boring’ about a dependable Morgan

The two sides have had similar starts to the season, each collecting two wins, a draw and a defeat in their opening four games. With both defences picking up three clean sheets apiece, it points to being a cagey encounter this weekend.

Louis van Gaal and Brendan Rodgers were two of the more active managers in this summer’s transfer window and remarkably as many as ten new signings could start this weekend’s game.

Opta-powered fantasy football game www.oulala.com have identified the midfield battle between new boys Morgan Schneiderlin and James Milner as a key area in which the game could be won or lost.

Of the seven key areas analysed, it is the Manchester United man that comfortably comes out on top. 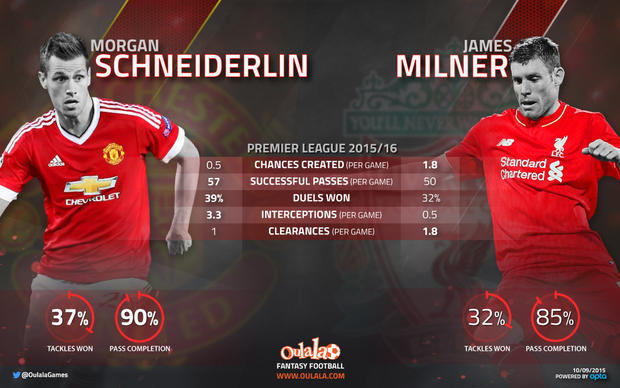 Schneiderlin has made more successful passes per game (57 to 50) and has a higher pass completion rate (90% to 85%) in the Premier League this season.

However, Milner has been the more creative of the pair. The ex-Manchester City midfielder has created 1.8 chances per game for his teammates compared to just 0.5 from the Frenchman.

Defensively, it’s Schneiderlin that has excelled. The 25-year-old has won a higher percentage of tackles (37% to 32%), has a better success-rate for head-to-head duels (39% to 32%) and has made more interceptions per game (3.3 to 0.5). Milner comes out on top for clearances with 1.8 per game to Schneiderlin’s 1.

Louis van Gaal had the better of Brendan Rodgers in both match-ups last season. Can Morgan Schneiderlin help continue this trend? The stats certainly suggest so.

« Return of the Keeper