How good are you at predicting starting line-ups?

With the FA Cup semi-finals taking place this weekend Premier League fantasy football managers will have a reduced slate of games to get stuck into. The Manchester City vs Stoke City match-up will  get proceedings under way, so in most formats line-ups will be locked by this stage, meaning that you will not have the option to edit your selections after this time.

It’s therefore imperative that you try to establish which players are likely to feature and which won’t. A number of sides stand out based on the bookmakers goals forecasts in Gameweek 35. 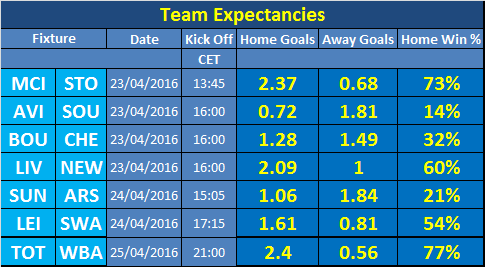 It’s odds-on that Manuel Pellegrini will shuffle his pack with that Real Madrid tie on the horizon so make sure that you reference official starting line-ups on this one before including the likes of David Silva and Sergio Agüero.

Be careful if you go for any players from in-form Liverpool. Daniel Sturridge should lead the attack but Jürgen Klopp is likely to make wholesale changes in midfield, in view of the upcoming Villareal tie, so try to avoid getting egg on your face by selecting players who end up with zero game time. Listen to reports coming out of Melwood so that you can try to gauge what he is thinking.

The title battle means that Leicester City and Tottenham Hotspur will almost certainly put out their strongest available line-ups. The latter have a very favourable match-up on paper so expect to see loads of line-ups stacked with Spurs’ players.

Looking for more team news ideas ? Check out Tools of the Trade