The standout performers from Gameweek 34

A double gameweek always provides lots of excitement for fantasy football players and Gameweek 34 was no different, with a handful of teams in action twice.

Manchester City, Arsenal, Liverpool and Manchester United were among the big clubs to play two games, although title contenders Leicester City and Tottenham had only one match this week.

Big points were up for grabs but it was some surprise names who caught the eye over the course of the two games – so let’s take a look at our team of the week for GW34.

Few would have had Heurelho Gomes in their fantasy football team for a tough looking away game at West Brom on Sunday, but the Watford goalkeeper saved two Saido Berahino penalties to score a massive number of points.

Gomes faced another two penalties against West Ham in midweek but was beaten twice by Mark Noble, although the Brazilian has an FA Cup semi-final against Crystal Palace to look forward to.

He can also console himself with the knowledge he is the first goalkeeper to save two penalties in two different Premier League games.

Daily fantasy football players are usually looking out for footballers who are listed as defenders but who often play further forward and Antonio Valencia is a fine example.

The Ecuador international winger has been playing as a right-back for much of the season but continues to get forward well and he picked up two clean sheets for United over GW34, as well as being a major facet of their attacking play.

Valencia’s team-mate Matteo Darmian also excelled during the double gameweek, even though he did not play a part in United’s first game against Aston Villa, a 1-0 win at Old Trafford.

Darmian made up for lost time with a goal and an assist on Wednesday night as United brushed FA Cup semi-finalists Crystal Palace aside with ease to close the gap on the top four.

Unlikely heroes often crop up at the end of the season and Jamaal Lascelles is showing signs of being a star man for Newcastle United, against all the odds.

The defender has struggled at times in his first Premier League season but he scored a vital goal in Newcastle’s crucial 3-0 win against Swansea City, with the clean sheet helping him to record a big score for GW34.

Newcastle drew 1-1 with Manchester City on Tuesday, but they are still in the relegation zone despite an upturn in form under Rafael Benítez and are running out of time to save themselves.

England manager Roy Hodgson may have compared him to Grant Holt after calls for him to be added to his country’s Euro 2016 squad, but Mark Noble continues to quietly stand out for West Ham as they push for a continental qualification place. 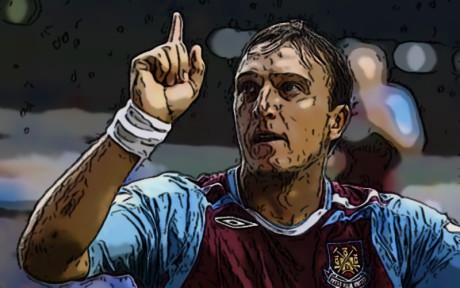 Noble beat Gomes twice from the spot on Wednesday night – no mean feat given the Brazilian’s fine record from penalties – to take his tally to the season for five goals. He also has four assists.

Unlike most of the players in Fantasy Spotlight, Dele Alli only played once in GW34, but he made it count with two goals in Tottenham’s stunning 4-0 rout of Stoke City at the Britannia on Monday.

Alli should really have had a hat-trick – he hit the post after rounding Shay Given when it looked easier to score – but another two strikes means he has scored 10 Premier League goals this season, which is a fantastic return for a midfielder who only recently celebrated his 20th birthday.

Andros Townsend has struggled to justify his £12 million price tag since a January move from Tottenham to Newcastle, but there are signs the winger might yet be able to keep his team up.

Townsend scored in the 3-0 win against Swansea – the second game in a row he has found the net – and he also provided an assist for his side. But consistency has always been a big problem for Townsend and he needs more big performances if the Magpies are to survive this season.

Alexis Sánchez was one of the top-scoring players during GW34, with the Arsenal attacker scoring his side’s goal in a 1-1 home draw against Crystal Palace, before hitting the net twice in a 2-0 win against West Brom at the Emirates on Thursday night.

After a worrying dry spell, the Chilean now has six goals from his last six Premier League games, but his hot streak has come far too late to fire his side back into contention for the title.

The return to fitness of Daniel Sturridge has not been completely smooth due to criticism from Liverpool manager Jürgen Klopp and Divock Origi occasionally keeping him out of the side, but the wriggly-armed forward continues to press his claims for a starting berth for club and country.

Sturridge scored in both of Liverpool’s games in GW34 – a 2-1 win at Bournemouth and a 4-0 derby day thrashing of Everton at Anfield – and may well get a good run in the side with Origi now injured.

Another England striking hopeful is Andy Carroll, whose effectiveness as an aerial battering ram has never been in doubt, at least when he is fit.

Like Sturridge, Carroll also scored in both GW34 matches to follow on from his recent hat-trick against Arsenal. He now has five goals in his last three games, which makes up more than half of his Premier League goals across the whole season.

It is tempting to wonder how many goals Sergio Agüero would score if he could stay fit for a whole season, with the Argentine hitting four goals in GW34, including a brilliant hat-trick as Manchester City thrashed Chelsea at Stamford Bridge.

Agüero has 22 league goals this season – two behind Golden Boot leader Harry Kane – scoring a goal on average every 97 minutes.

His four-goal haul this week also saw him score his 100th Premier League goal. He is the second fastest striker to reach the landmark, behind only Alan Shearer, taking 147 games compared to Shearer’s 124 matches.

It promises to be brutal »