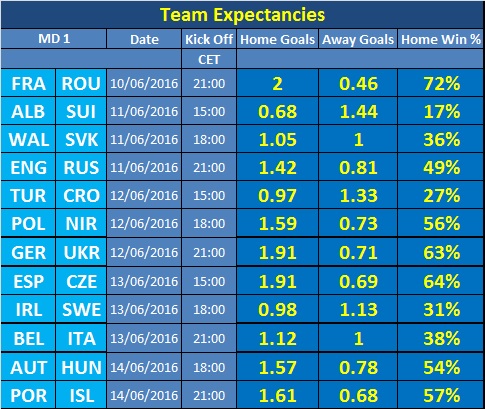 Goal projections for the opening round of Euro 2016 Group games

There is only one place to start for any fantasy football manager that is contemplating getting involved in any of the numerous Euro 2016 fantasy football competitions available around the world – those all-important goal projections which enable you to determine how difficult a fixture is, the likelihood of a clean sheet and a team’s goalscoring potential.

If you are a regular visitor to Fantasy Football Portal you will know that we provide this information for each round of English Premier League games, based on betting odds generated by the bookmakers, and we’ll be doing the same throughout the course of the Euros.

We’ll group these together by match-day rounds so that they are easily accessible. Some operators will offer contests that cover just a single game, others will cover all or some of the matches played on one day while others will extend the available matches to cover the full game round. It doesn’t which type you enter – the information remains invaluable and should be used in conjunction with many of the strategies we highlight in our free fantasy football eBook.

Here’s those vital numbers for the opening Euro 2016 fixtures.

Most fantasy football games have scoring systems that focus on goals, assists and defensive actions. It therefore makes a lot of sense to target players from teams that are expected to score a few goals or concede little. Of course, more sophisticated scoring systems have been introduced, meaning that other metrics are now providing a bigger contribution to a player’s points potential but the importance of goal expectancies still remains strong.

How do we use this data?

When focusing on defenders it is practical to consider those that are up against opponents who have a low goals expectancy. Romania are pencilled-in at just 0.46 goals, the lowest of all the 24 sides involved in this particular round of games. Bookmakers offer a range of other betting lines, one of which is the over/under 0.5 goals for each team. Romania have been given a 64% chance of scoring exactly zero goals in this market. Therefore, if you target French defenders you will have a great chance of securing ‘clean sheet’ bonus points. If you can find one or two that can pick up points from other facets of play on top of this, you may have identified a player with tremendous upside.

France, Germany and Spain are the 3 sides that are predicted to score the most goals in the opening round. This implies that their offensive players are more likely to be directly involved in goals/assists, two of the scoring criteria that traditionally generate the most points.

Budget constraints will need to be factored in, if you’re participating in contests that include a salary cap but by making these goal projections your first port of call for any contest you decide to tackle, you will give yourself a firm base from which to work from!