The Azzurri are a difficult side to predict – they are capable of a spectacular group stage exit but also have that unerring ability to go deep into a tournament, grinding out results along the way. They come into the Championship, rocked by injuries to key midfielders. Creativity already looked like a major issue so the news that Riccardo Montalivo wouldn’t be fit enough to participate either, joining Marco Verratti and Claudio Marchisio on the sidelines, was a bitter pill to swallow.

The Italians, who were unbeaten throughout their qualifying campaign, conceding just 7 goals in the process, will need to be at their resilient best, if they are to navigate their way past Belgium, Sweden and the Republic of Ireland and progress to the knockout phase of the competition.

Antonio Conte is a flexible manager who has played various formations in the past but he looks almost certain to go with the 3-man defence in France and the only question that remains is whether he will set Italy up playing 3-5-3 or 3-4-3.

The Italian will take over at Stamford Bridge, once the European Championships are concluded but it’s fair to say that Chelsea fans have not been over-enamoured by the prospect of the Blues starting next season with this much-maligned system.

There have been strong rumours in the Italian press suggesting that he will stick with the 3-5-2 that he utilised in the recent 1-0 friendly victory over Scotland.

Only time will tell if he does but the inclusion of that ‘trusted’ Juventus backline looks a formality.

Gianluigi Buffon has already surpassed the 150 cap mark and will undoubtedly go down as one of the greatest keepers of all time. The shot-stopper , a World Cup winner in 2006, has lived up to his ‘Superman’ billing  on countless occasions and has 7 Scudettos to his name.

Federico Marchetti and Salvatore Sirigu are the back-up goalkeepers.

Giorgio Chiellini, Andrea Barzagli and Leonardo Bonucci will be familiar faces in front of Buffon. The latter chipped in with 3 Serie A goals during the 2015/16 season and might be the best option for fantasy football managers. He has also scored 3 times for the national side since making his debut.

Manchester United’s Matteo Darmian is likely to be deployed in one of the wing-back positions while Mattia De Sciglio and West Ham United’s Angelo Ogbanna will provide the defensive cover.

Across the middle Daniele De Rossi is likely to get the nod ahead of Thiago Motta where he’s likely to line-up alongside Alessandro Florenzi and Emanuel Giacccherini. Florenzi is a really versatile player and scored an absolute screamer against Barcelona earlier this season.

Emanuele Giaccherini didn’t make much of an impact during his short spell at Sunderland but he remains a firm Conte favourite. Lazio’s Antonio Candreva should occupy the other wing-back berth.

Federico Bernardeschi, Marco Parola and Stefano Sturaro will all be itching to get involved should the opportunity arise.

There is plenty of competition for starting spots up front with Southampton’s Graziano Pellè seemingly in pole position despite being in and out of the Saints side all season. He’s likely to line-up alongside Éder who found the back of the net a respectable 12 times for a Sampdoria team that struggled in Serie A.

Italy do have a habit of unearthing unheralded forwards at major championships so any of the aforementioned quartet could easily make a name for himself.

Stephen El Sharaway might be the one to benefit should Conte choose to switch from a 3-5-2 to a 3-4-3 during the course of a game but for the fantasy manager, including any of Italy’s attackers, comes with a degree of risk.

Antonio Candreva scored from the penalty spot in the Azzurri’s final warm-up game against Finland, cementing his place as their first choice penalty taker and he’s sure to be involved in other set-piece situations. 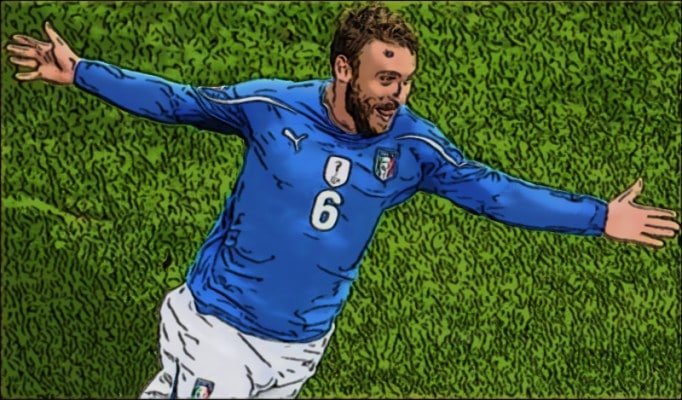 Daniel De Rossi scored for the national team for the 18th time in the same match. He has more international goals than any of his team-mates and could easily pull rank in a  few dead ball situations.