Cherry on the Cake

Cherry on the Cake

With Bournemouth, Norwich City and Watford set to join England’s elite, our friends over at Opta-powered fantasy football game www.oulala.com have analysed the stats and identified three players that have the potential to make an impact in England’s top flight next season.

First up is Bournemouth winger Matt Ritchie. The 25-year-old enjoyed a terrific campaign in the Championship last season and played a major role in Bournemouth’s title win, the club’s first venture into the top flight in their 125 year history. Ritchie’s efforts earned him a deserved place in the Championship’s team of the season. 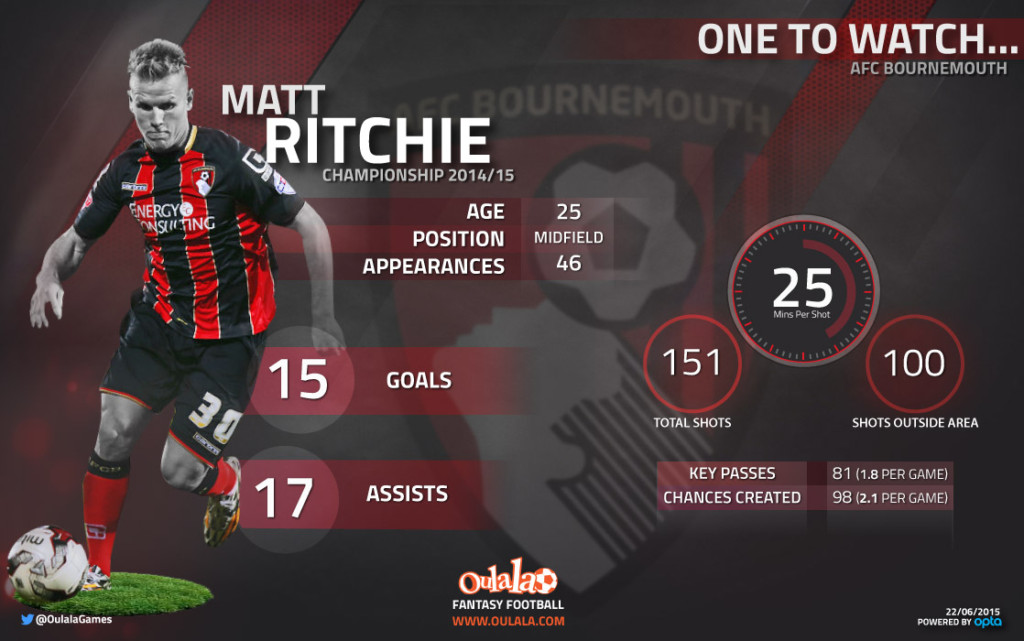 The winger was involved in 32 goals for the Cherries last season, the most combined goals and assists of any player in the Championship. The 17 assists that Ritchie produced was the most of any player in the league and his 15 goals made him the second highest goalscorer for the club as well as putting him joint top with Bakary Sako of Wolves and Norwich’s Bradley Johnson as the Championship’s highest goal scoring midfielders.

The 25-year-old supplied the most key passes (81) for Bournemouth last season at a rate of 1.8 per game and also created 98 chances for his team mates, a rate of 2.1 per game.

Ritchie was called up to the Scotland national squad in March, with his debut coming against Northern Ireland and he made an immediate impact, providing the assist for the only goal in the game. He quickly followed that up with his first international goal against Qatar in June.

Having dipped his toes into the international scene, Matt Ritchie is about to take the plunge into the Premier League in August. The stats suggest he could cause waves when he does.

Don’t swim with the Sharks »