Jose Mourinho is undoubtedly the master of deflection. If Chelsea’s form takes a dip, the Chelsea manager will mask his side’s performances with the typical antics that we’ve become accustomed to. This season’s Eva Carneiro saga comes to mind.

After his side’s 3-1 loss to Everton at the weekend, Mourinho and his men now have nowhere to hide. It is Chelsea’s worst start to a season for 27 years. Now already 11 points off leaders Manchester City, it will take nothing short of a miracle for Jose Mourinho to turn Chelsea’s league fortunes around, and it’s only September.

Opta-powered fantasy football game www.oulala.com have taken a detailed look at Chelsea’s opening five games this season to the start that they enjoyed last term, to fully emphasis the extent of the difficult situation that they find themselves in.

Defensively the champions have conceded 12 goals in their first 5 games, a rate of 2.4 goals per game. Last season the 7 goals scored against them in their opening five fixtures came at a rate of just 1.4 per game.

Sticking with defending, their tackling numbers have dropped dramatically. Last season they won 51% of tackles in the first 5 games, this season is is down to just 38%.

Offensively, it’s just as bad. Last year they netted an impressive 16 goals in the first 5 games, a rate of 3.2 goals per game. This season that is down to just 7 goals, an average of only 1.4 goals per game. 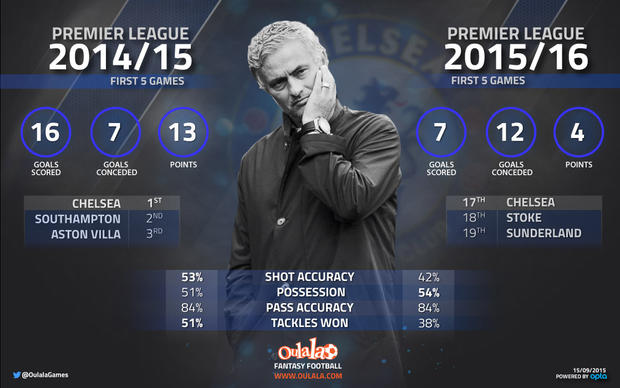 Their drop in shot accuracy will be a concern for Mourinho. Last season it sat at a respectable 53%. This season Chelsea’s shooting accuracy is down to a less impressive 42%.

Surprisingly the champions are actually enjoying more possession this season, from 51% last year to 54% this year. Furthermore, their passing accuracy sits at 84% this term, just as it was in their first 5 games last season.

The numbers show that the champions are enjoying as much of the ball as they did last season. However, the lack of firepower in attack and defensive frailties have taken the champions from 13 points in 5 games last season to just 4 this season and in-turn dropping 16 league places from top last year to now just one place above the relegation zone this year.

Mourinho pledged his future to the club by signing a new four-year deal in August, taking him up to 2019. But with owner Roman Abramovich’s history of culling under achievers without a second thought, the crisis the champions are currently experiencing will be a true test of whether the hierarchy have changed their ways, or if we’ll again see the same old Chelsea.

It’s no doubt that Jurgen Klopp and Carlo Ancelotti will be keeping a close eye on how the next few weeks unfold at Stamford Bridge.

The Legend returns to Beggar’s Bridge »