The Legend returns to Beggar’s Bridge

Petr Cech will return to the Arsenal first-team on Saturday following Arsene Wenger’s decision to rest the Czech for his side’s 2-1 away defeat at Dinamo Zagreb in the Champions League on Wednesday night. Cech returns to Stamford Bridge this weekend for the first time since his summer move away from Chelsea.

The 33-year-old played an important role as his new side beat Chelsea in the Community Shield in August, the first victory Arsenal manager Arsene Wenger has had over Jose Mourinho in 14 attempts. The Czech international will be looking to repeat that feat at his old stomping ground this weekend against a Chelsea side currently experiencing a crisis domestically after three losses in their opening five games.

With first choice keeper Thibaut Courtois facing a lengthy spell on the sidelines following surgery, it will be up to his deputy Asmir Begovic to fill in for the Belgian once again this season.

Opta-powered fantasy football game www.oulala.com have taken a look at Begovic and Cech to see how the pair have compared in their opening Premier League games.

Begovic is yet to keep a clean sheet this season while Cech has managed three clean sheets in his first five league games for Arsenal. 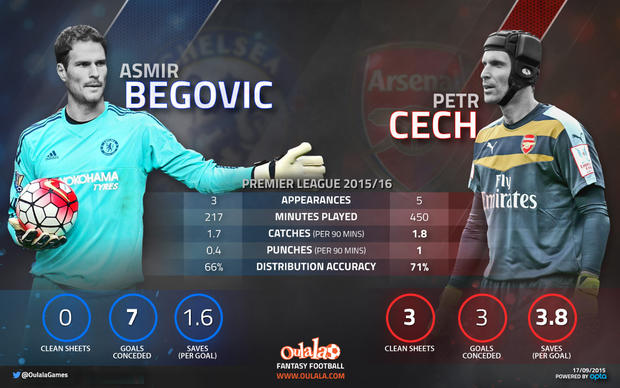 Petr Cech is even dominating Asmir Begovic for distribution. He has accurately found teammates 71% of the time compared to 66% from the Bosnian.

The stats certainly suggest that Chelsea are missing the man that spent 11 seasons at the club, gaining legendary status during that spell. While the keeper that replaced Cech is failing to fill his boots.

Can Asmir Begovic prove the critics wrong and help Chelsea back to winning ways or will Petr Cech mount yet further misery on his old club?

Harry to rekindle the X Factor »