Liverpool left-back Joe Gomez has been winning rave reviews this season. His display away to Arsenal on Monday night was the latest to turn heads. It’s hard to believe that he is still just 18 years of age.

In the opening three Premier League games, the 18-year-old is outclassing his peers in every key area defensively. 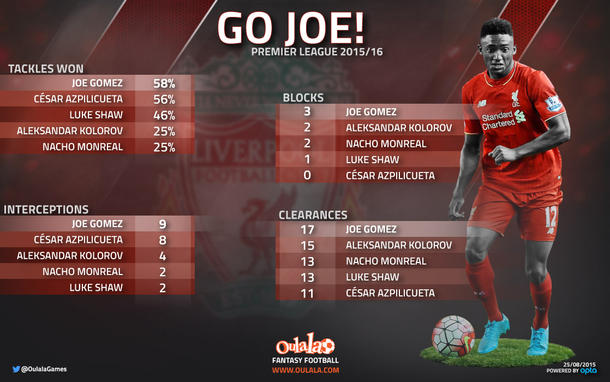 The youngster also excels for interceptions. He has won a total of 9 in his 3 games. Chelsea’s Cesar Azpilicueta sits one behind on 8.

The 18-year-old leads the other four for blocks too, making a total of 3 this season. Both Arsenal’s Nacho Monreal and City’s Aleksandar Kolorov have made one fewer with 2.

The Liverpool left-back is even leading the others for clearances too. He has made a total of 17 this season. Aleksandar Kolorov is his closest challenger of the foursome with 15.

Liverpool racked up their third clean sheet from their opening three games against Arsenal on Monday, with Gomez instrumental in continuing the Reds’ 100% defensive record in the Premier League.

With Roy Hodgson delaying the announcement of his England squad due to injury doubts surrounding a selection of key players, Gomez will have another chance to impress the England manager at home to West Ham this weekend.