Having chased Kevin De Bruyne all summer, it appears that Manchester City have finally landed their man after reports have suggested that Bundesliga side, Wolfsburg, have accepted an offer in the region of £58 million.

The deal will see City break their transfer-record for the second time this summer following the capture of Raheem Sterling from Liverpool,

Sterling has slotted straight into the City team on the left-wing alongside playmaker David Silva who has impressed in the number 10 role in the opening games this season. This leaves the right-wing spot as the likely position that the Belgian will be vying for, currently occupied by Jesús Navas.

But what can De Bruyne contribute  to Manchester City that the Spaniard has not? And what is the Belgian’s game missing that Navas can offer?

Opta-powered fantasy football game www.oulala.com analysed both players all the way back to the beginning of the 2013/14 season to give the clearest possible picture in how the duo match up both offensively and defensively.

It is instantly clear that the pair offer very different qualities. 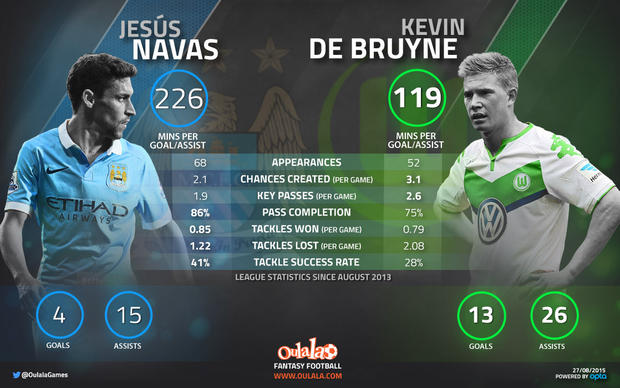 De Bruyne has excelled creatively and his end product appears to be on a different level to the Spaniard’s.

The Belgian has scored more league goals (13 to 4) and made more assists (26 to 15) than Navas, despite playing fewer games. This has resulted in the 24-year-old racking up a goal or an assist every 119 minutes. In contrast it has taken the Spaniard almost double the amount of minutes to do the same (226).

However, the Belgian’s excellent offensive stats appear to have a detrimental effect on the defensive part of his game.

As passing, possession and ball retention are a big part of Manchester City’s overall game, De Bruyne’s passing and defensive stats have little to be desired.

When it comes to defensive duties, again the Belgian fails to deliver. Navas has won more tackles per game (0.85 to 0.79) and lost fewer tackles per game (1.22 to 2.08), which has resulted in the Spaniard’s tackle success-rate sitting at 41% to De Bruyne’s disappointing 28%.

One thing is for certain. Kevin De Bruyne will make Manchester City an even more dangerous proposition offensively. However, it appears… at a cost.