Roy Hodgson is set to announce his England squad on Tuesday for the upcoming Euro 2016 qualifiers.

Opta-powered fantasy football game www.oulala.com have analysed the stats from the opening Premier League games to see which international regulars have been under-performing, and which players have shown the form to warrant consideration.

Should selection come down to current form or experience? Or will we see the same names in Hodgson’s squad, irrespective of their recent performance levels at club level?

Looking at the cold hard stats, it is apparent that a few surprises emerge. Primarily the exclusions of Raheem Sterling, Wayne Rooney and Harry Kane, simply because others are performing to a higher standard.

In goal, Joe Hart’s position is safe. With 3 clean sheets and still yet to concede a Premier League goal this season, Hart retains the number one jersey. The Manchester City keeper has made 5 saves and 12 successful claims this season.

There are no shocks at full-back as Nathaniel Clyne and Luke Shaw feature. However, in the heart of central defence Aston Villa’s Micah Richards and Chris Smalling of Manchester United partner up at the expense of Gary Cahill, Phil Jones, Phil Jagielka and John Stones.

Richards has made an impressive 13 clearances this term, while Smalling has been the heartbeat of Manchester United’s defence, making a massive 26 clearances this season.

The midfield lines up with Ross Barkley as the only international regular to feature. The Everton youngster has started the season well scoring 2 goals, making 1 assist and completing 85% of his passes this season.

On the right is Norwich’s Nathan Redmond. The Under-21 regular has returned to the Premier League with a bang after scoring 2 goals, making 1 assist and completing 7 take-ons. 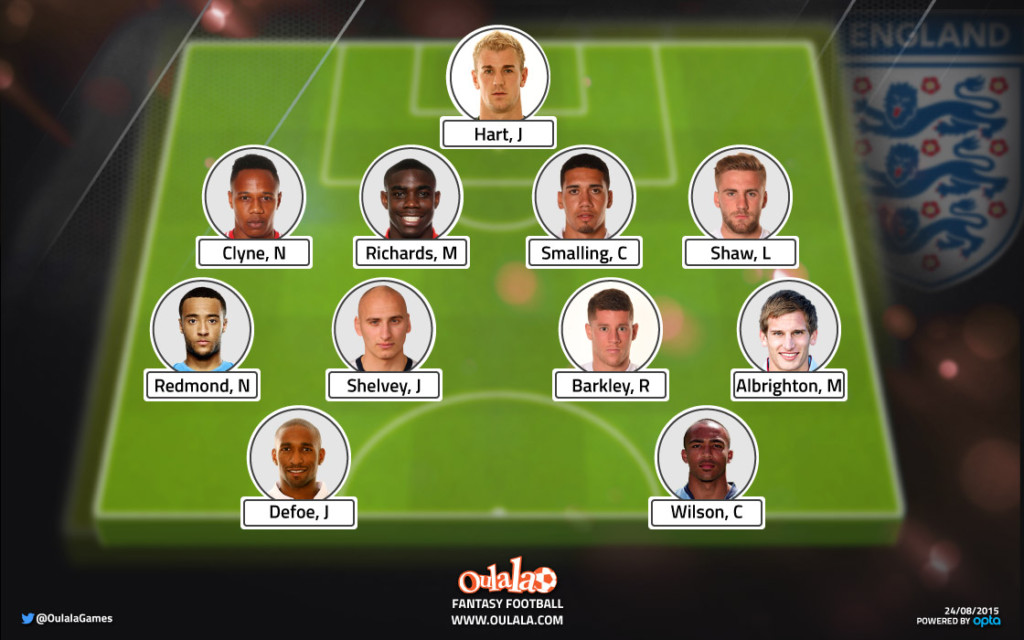 On the left sits Marc Albrighton of Leicester City. The 25-year-old appears a man reborn this season scoring 1 and assisting 3 of his side’s goals.

Protecting the back four is Swansea’s Jonjo Shelvey. The midfielder has completed 168 passes at a rate of 88%. He has also made an impressive 12 key passes this season.

Up top Wayne Rooney and Harry Kane miss out to the unlikely duo of Sunderland’s Jermaine Defoe and Callum Wilson of the newly promoted Bournemouth.

Disappointing starts to the campaign have seen England’s expected first choice duo, Rooney and Kane, fail to find one goal between them this season despite a total of 13 shots. Rooney sits on a disappointing 50% shot accuracy, with Kane at an even more miserable 40%.

In contrast, Defoe and Wilson have impressed.

The Sunderland forward has netted 2 goals from his 3 games with a 50% strike-rate and a 100% shot accuracy from his 4 shots. However, at 32 is Defoe still a viable option for England at international level?

At Bournemouth, the one capped Under-21 Wilson has netted 3 goals, a hat-trick away to West Ham. His strike-rate sits at 43%, while his shot accuracy stands at 80% from his 7 shots. Is it too early for an England call-up for the 23-year-old?

It’s unlikely that Roy Hodgson’s starting XI against either San Marino or Switzerland will feature many of these players, however they all have good reason to believe that an England call-up is within reach after their impressive starts to the season.

Will Hodgson play it safe and select the under-performing likes of Wayne Rooney and Harry Kane or will we see a few fresh faces welcomed into the England setup on the back of the fine form that they have shown in the opening games this season?