When will we see a VAR pitchside review in the Premier League? 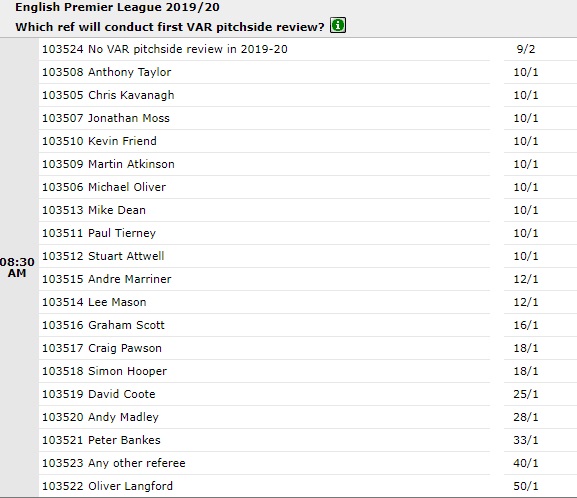 When will we see a VAR pitchside review and which referee is most likely to break the Premier League protocol first?

Love it or hate it, VAR is here to stay.

A spate of controversial decisions last weekend have had many fans questioning exactly how VAR is being used and why the referees are so reluctant to use the pitchside monitors that are available to them.

At the start of the season and in an effort to speed up the review process, the Premier League advised referees to rely on the Video Assistant Referees to act as their guide for any possible on-field mistakes and this protocol has been strictly adhered to so far with no referee having yet opted to review an incident for himself. However, judging by a recent publication from Martyn Ziegler, Chief Sports Reporter for The Times, it looks highly likely that Premier League clubs will ask for this to be changed when the next PL Chairmen’s meeting takes place on November 14th with VAR expected to be top of the agenda.
With this in mind, it was refreshing to see that Betonline have offered a couple of prop bets in their soccer specials ‘game props’ section relating to VAR pitchside reviews.
Odds of 9/1 are available for one to occur in any of the 10 matches taking place on Matchday 11 while it is 9/2 for no VAR pitchside review to occur at any point during the remainder of the 2019/20 English Premier League season.
You can also wager on which Premier League referee will be first to make use of the pitchside monitor that is available for them to use at all Premier League grounds. Chris Kavanagh will get the first opportunity to break the deadlock when Bournemouth host Manchester United in Saturday’s early kick-off.

It’s just a shame that Mark Clattenburg isn’t still plying his trade in the Premier League as this would have been right up his street!
VAR clearly needs to iron out a few teething problems but the possibility of tennis-style challenges and the use of microphones like we see in sports such as rugby could make the whole experience much more tolerable for the long-suffering football fan.
After last weekends shenanigans, the prospect of seeing a new record for the number of penalties awarded in a Premier League campaign remains a realistic target but some explanation as to why they are or are not being awarded might go some way to appeasing spectators.
VAR clearly needs a rethink – what changes would you like to see and why?