Manchester United, Arsenal and Chelsea all have high goal expectancies this weekend as we reach that pivotal point in the season at which their lingering Champions League hopes are very much in the balance. All three sides face crucial ties next week with United and Arsenal almost certainly needing victories to progress while Chelsea will need a result of some description as well. Expect to see some mollycoddling of their star players on Saturday with the likes of Mesut Özil being taken out of the firing line and preserved as early as possible. This creates a dilemma for the daily fantasy football manager and you need to ask yourself a question – are you happy selecting a player that might only get 70 minutes?

We’ve therefore decided to focus our main attention elsewhere as we put together a line-up for the Mondogoal £10K Shootout. The Saints were blown away by a resurgent Liverpool team on Wednesday but we’re expecting them to get back on track against bottom of the table Aston Villa so Cédric Soares, Dusan Tadic and Graziano Pellè are all included. Spurs were a little flat last week, arguably as a result of their midweek Europa League exertions. These were well documented in a Jenny Brown piece for WhoScored but we’re expecting Tottenham to be much fresher against the Baggies and have included Harry Kane, Christian Eriksen and Kyle Walker.

Swerving Jamie Vardy is a gamble as he attempts to equal the record set by Jimmy Dunne who scored in 12 successive top flight games but Swansea might not be as bad as the league table suggests so we prefer Watford’s Odion Ighalo instead, who has also been in fine form.

The consistent Aaron Ramsey is included as well as Daley Blind who added a whole new dimension to his fantasy points potential by assuming corner taking responsibility last weekend, whipping in some terrific deliveries in the process. Petr Cech and Nyom complete the line-up.

The buy-in for this event is just £5 and the field is capped at 2200 entries. 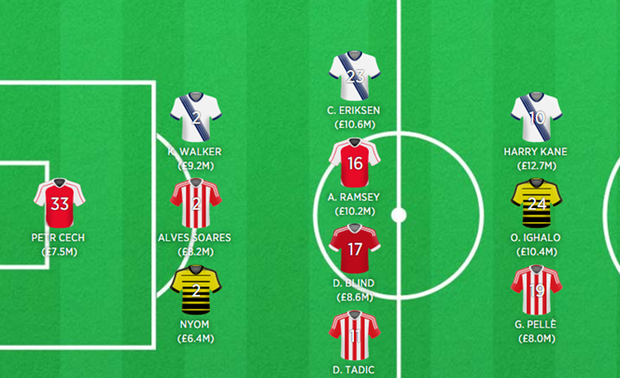 How to pick your DraftKings daily fantasy soccer defenders »