Guys usually need a legitimate excuse to get out of Valentine’s Day, so for any Tottenham Hotspur or Leicester City supporter, reasoning doesn’t come much bigger than this. It’s surely a better script than anything Fever Pitch could ever conjure up, as, not only are Spurs in with a chance of sealing their first crown since 1961, but, the Foxes have the opportunity to open up an 8 point gap over Arsenal with victory at the Emirates in their bid to claim the most unlikely of  title triumphs.

Super Sunday is likely to prove a pivotal day so show some forgiveness if those Roses never arrive!

Chelsea and Everton look to have the pick of the Saturday fixtures so expect players from these two sides to form the fulcrum of many fantasy sides this weekend. Willian is Chelsea’s highest rated player on WhoScored and he could be a popular choice this weekend. The Brazilian has put in 212 crosses so far this season, a facet of his game that is handsomely rewarded by the scoring metrics of the new UK operator DraftKings.

However, one word of caution – Chelsea travel to Paris on Tuesday for that crucial Champions League tie so make sure you take advantage of their ‘late-swap’ feature, if necessary, which allows you to switch players in later fixtures when they are not selected in the starting XI. 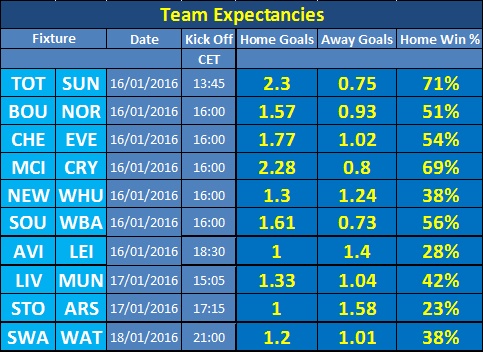 Elsewhere, Norwich City versus West Ham United has the look of goals about it, so the likes of Payet, Antonio, Valencia, Brady and Naismith are worthy of consideration.

Willian is available at $8k on DraftKings UK (vs Newcastle United, $50k Budget)