Serie A is home to some of the best goalkeepers in world football, ensuring that the last line of defence is always capable and can be relied on when needed.

Goalkeeping legends like Gianluigi Buffon often play deep into their 30s in the Italian top division, but fine young goalkeepers like Gianluigi Donnarumma are also breaking through in Serie A.

There is lots of choice for Serie A goalkeepers, but here is the Fantasy Football Portal guide to five of the top stoppers in the league to consider when selecting your daily fantasy football teams.

Gianluigi Buffon is considered to be one of the best goalkeepers in the history of the game and the man they call Superman continues to excel in Serie A at the age of 38.

Buffon – the most capped player for the Italy national team – has kept 12 clean sheets from 23 appearances in Serie A so far this season, with only one rival having racked up more shut-outs.

The veteran’s reflexes remain as sharp as ever and with Juve on the hunt for a fifth straight league title, Buffon has kept five clean sheets in a row, allowing the Old Lady to close the gap on Napoli at the top of the Serie A table.

Buffon is showing no signs of slowing down and it is possible he could emulate the greats of the game like compatriot Dino Zoff by playing on for club and country into his 40s.

Having been named the Serie A Goalkeeper of the Year a record ten times, Buffon’s legend has already been assured, but he continues to write fresh chapters in his glittering personal history.

The only goalkeeper in Serie A to have kept more clean sheets than Buffon this season is the consistently brilliant Slovenia international Samir Handanović.

With 13 shut-outs from 24 appearances in the Italian top flight so far this season, Handanović has helped to keep Roberto Mancini’s men in the hunt for a Champions League qualification place.

Handanović set the internet alight in January with a truly miraculous save in Inter’s 1-1 draw with Atalanta, flinging himself in front of Luca Cigarini’s point-blank volley to somehow keep the ball out of his goal – it was a stop few other goalkeepers in world football could have made.

Ciprian Tătăruşanu might well be the most underrated goalkeeper in Serie A, although the league is starting to sit up and take notice of the excellent Fiorentina stopper.

The 30-year-old has kept clean sheets in half of his 24 appearances in the league this season – statistically the same record as Buffon – without generating anything like as many column inches.

With Fiorentina flying high in Serie A and still competing in the Europa League, the importance of the Romania international cannot be understated, with Tătăruşanu’s reflexes particularly excellent.

Pepe Reina has been consistently among the finest goalkeepers in Serie A since signing for Napoli, initially on loan, before agreeing a permanent deal following a brief spell at Bayern Munich. 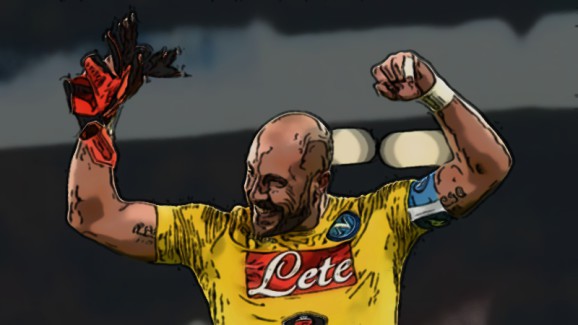 Reina, who made over 350 appearances for Liverpool, has kept 11 clean sheets in 24 Serie A appearances so far this season, helping his side to put together a surprise title challenge.

With Juventus heaping pressure on Napoli in the race for the Scudetto, Reina has held his defence together in the last few weeks, recording back-to-back clean sheets as his side stay top.

If Napoli are to hold off the challenge of the Old Lady and win their first league title in over 25 years, 33-year-old Reina will have to be at his very best in the coming weeks and months.

While Serie A’s elder statesmen like Buffon and Reina have long been considered among the best goalkeepers in the world, a new pretender to the throne is lighting up the league this season.

Siniša Mihajlović made the bold call of replacing his regular starting keeper Diego López after AC Milan went three games without a win and Gianluigi Donnarumma has repaid his coach’s faith by recording six clean sheets from his 16 Serie A appearances so far.

When he made his debut in a 2-1 win against Sassuolo, Donnarumma, who was just 16 years old, became the youngest goalkeeper ever to start a match in the history of Italian football.

“He seems to be predestined to become a great goalkeeper – and it all depends completely on him,” says Dino Zoff, and it is hard to argue with the 1982 World Cup-winning captain.

Can Everton Build Something Special? »