The Algerian international sits behind just Barcelona’s Neymar, however stands alone as the top rated player in the Premier League after the opening 12 games.

In terms of midfield players in Europe, nobody touches Mahrez. Real Madrid’s Luka Modric is the closest sitting 28 points behind him.

The five assists that the 24-year-old has provided this season has been bettered by just two other midfielders in Europe, Premier League duo Mesut Özil (10) and David Silva (6). 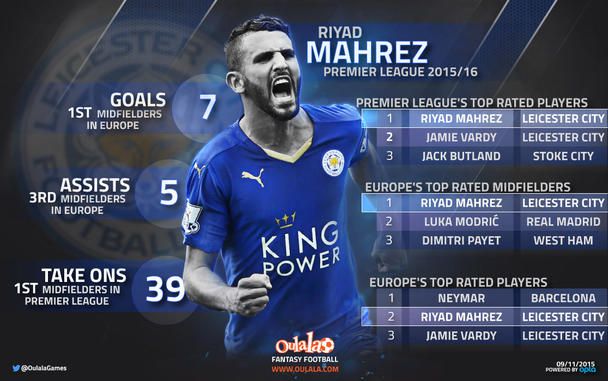 Mahrez leads the Premier League for completed take-ons this season with a total of 39, an average of 3.5 per game. His closest challengers are last season’s Player of the Year Eden Hazard and Crystal Palace’s Wilfried Zaha who have each completed 36 take-ons.

With almost a third of the season gone, Leicester sit just one point off joint Premier League leaders Manchester City and Arsenal in third spot.

Recent reports have linked the in-form Mahrez to big money moves away from Leicester City. Rumoured clubs interested include Manchester United and Arsenal.