To date 22-year-old Butland has only made two appearances for England with one of them coming in a friendly, however his recent form of four clean sheets in five Premier League matches could earn him another first team start.

Despite having less game time than Hart, stats obtained from www.oulala.com highlight that Butland has certainly been the busier of the two goalkeepers.

This season Butland has averaged 27 minutes per save compared to Hart’s 71 minutes. This is no doubt a testament to City’s defence conceding just five goals in 11 matches that Hart has played in. Meanwhile Stoke City have conceded 12 goals in 12 matches with Butland ever present. However, as pointed out the Stoke goalkeeper has had a lot more to deal with and also edges Hart in terms of saves per goal, averaging 3.3 and 2.8 respectively. 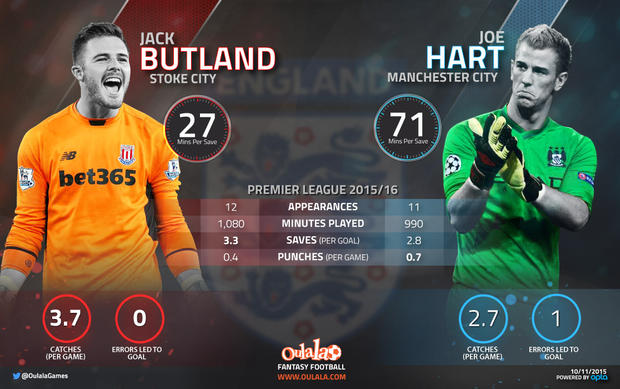 Although competent and highly reliable, Hart has made one error which led to a direct goal while Butland has made none. Naturally the busier Stoke keeper has also made more catches per game (3.7 to 2.7) than Hart.

Oulala’s stats show that in terms of punches per game Hart has the edge with 0.7 compared to Butland’s 0.4.

No doubt at 28 years of age and 55 England caps under his belt, Hart has the greater experience. However the upcoming international friendlies might just be the perfect test for Butland to earn more experience and further cement his place as a top flight English goalkeeper for years to come.

Mr Shakira insists Stones is ‘The One’ »