The Designated Player – Cash or Glory ?

Andrea Pirlo is the latest player to be linked with a move to the lucrative MLS and could team up with Frank Lampard at New York City after playing his final game for Juventus in this weekend’s Champions League Final. Just last week Graham Ruthven produced an intriguing article for WhoScored questioning whether Sebastian Giovinco was worth his record salary of $7m a season. Coincidently Giovinco was also our headline Hotcard selection for the same weekend round and the Italian didn’t let either party down picking up 2 more assists as well as being named MVP for the week.

This prompted us to take a look at designated players in a bit more detail to try to ascertain whether they are worth their weight in gold or are just going through the motions to top up their pensions and more importantly whether daily fantasy football managers should consider constructing their line-ups around them?

Just to recap the designated player rules allows MLS clubs to acquire up to three players whose salaries can exceed the team’s budget. There are 47 designated players in 2015, 27 returning and 20 of which are new including the aforementioned Giovinco. If we exclude Gerrard and Lampard who are yet to kick a ball in anger that leaves us with a pool of 18 new recruits to look at. 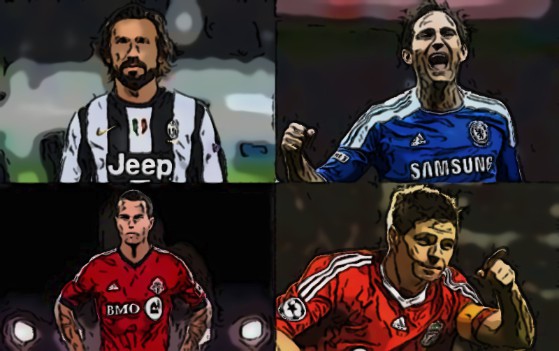 It’s no real surprise to see that the entire list comprises of offensive-minded players. There isn’t one defender or goalkeeper amongst them which makes sense since they are being paid their inflated salaries to put bums on seats.

In the tables below we’ve split the list into two groups based on age – overs 25s and 25 years and under and have used the Mondogoal scoring criteria/salary caps. 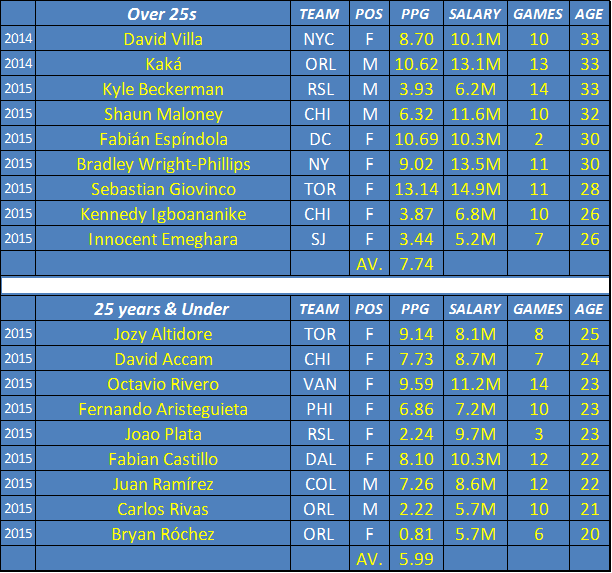 The player average for the group as a whole is 6.87 PPG. To put this into perspective 13 forwards and 24 midfielders bettered this figure during the 2014/15 EPL season with 7 players managing to average over 10 points per game.

The older group is performing better of the two groups and the 2 youngest players are performing worst of the whole group. This augurs well for the likes of Gerrard and Lampard who have the experience to justify their high salaries and there seems no reason why a fantasy manager should not make them an integral part of his team selection process if game conditions suit.

The roster rules associated with MLS have made it a very competitive league and the addition of the odd maturing vintage certainly seems to add some spice!