Sunderland recorded a record sixth consecutive win over north-east rivals Newcastle. Aston Villa’s loss at home to Swansea cost Tim Sherwood his job. While Harry Kane was back to his best, netting a hat-trick in Tottenham’s 5-1 away win over Bournemouth.

Fantasy football game www.oulala.com have analysed the player data using their database which covers 70 statistical criteria and have assembled the best players from the Premier League this weekend, purely based on stats.

The Romanian was statistically the best performing keeper in the Premier League this weekend. Pantilimon made the most saves by any keeper (7) and helped Sunderland to a clean sheet in the Wear-Tyne derby. The 28-year-old also made 2 punches and enjoyed a distribution accuracy of 71%.

Oulala’s stats show the Arsenal centre-back was one of the top performing defenders this weekend. The Frenchman made 5 interceptions, 6 blocks and enjoyed an excellent pass accuracy of 88%. He also scored the second of Arsenal’s two goals in their 2-1 win over Everton.

The 28-year-old was busy at both ends of the pitch in Sunderland’s 3-0 win over Newcastle on Sunday. The full-back scored the second of Sunderland’s goals. He also made 2 key passes. Defensively, Jones made 2 successful tackles and 3 interceptions.

The Baggies centre-back was arguably the busiest defender in the Premier League at the weekend. Oulala’s data shows that the 35-year-old made 2 successful tackles, 4 interceptions, won 3 aerial duels and made a total of 10 clearances during his side’s 1-0 away win at Norwich.

Despite finishing on the losing side, the Chelsea centre-back was at the heart of the action. Cahill won 3 aerial duels, made 6 blocks and enjoyed a pass accuracy of 78%. The 29-year-old also scored Chelsea’s goal in their 2-1 loss at West Ham. 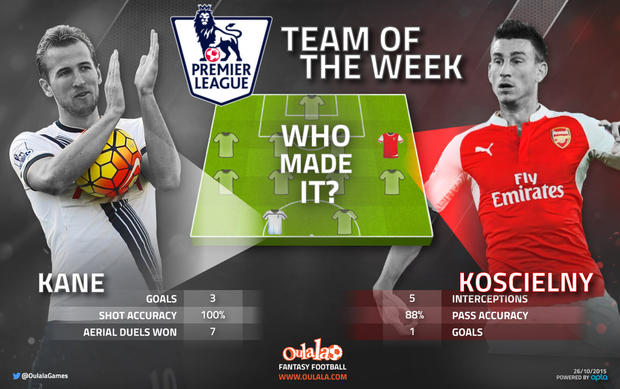 The stats from Oulala illustrate the importance Almen Abdi had in Watford’s 2-0 away over Stoke City. The Swiss international made 4 successful tackles and 2 clearances. At the other end of the pitch, Abdi provided 2 key passes and scored the second of his side’s goals.

The 21-year-old is enjoying a great season and is showing a new found level of consistency. Barkley made 45 successful passes in Everton’s 2-1 loss at the Emirates, with an 85% accuracy. The midfielder made 1 key pass, 2 interceptions, completed 5 take-ons and scored Everton’s goal, via a deflected shot.

Oulala’s figures show that the Brazilian international put in a shift for Chelsea, despite finishing on the losing side. The 27-year-old enjoyed a pass accuracy of 87%, made 3 key passes and completed 4 take-ons. Defensively, Willian completed 3 successful tackles.

The Scottish international scored within a minute in his side’s 5-1 loss at home to Tottenham. The 26-year-old was Bournemouth’s only shining light with 5 shots, 2 key passes and 2 tackles.

It appears last season’s goal machine is back. Kane scored a hat-trick in Spurs dismantling of Bournemouth on Sunday. Oulala’s stats show that the 22-year-old had 5 shots with an accuracy of 100%. He also won an impressive 7 aerial duels and made 2 tackles.

The Argentine was in exceptional form in the Hammers 2-1 win over Chelsea. Zárate scored the first of the game’s goals. He had 2 shots, both on target. The forward even put a shift in defensively, making 2 successful tackles and 2 interceptions. Astonishingly the 28-year-old completed 100% of his 19 passes.

« Harry Kane and his Six Pack