The Frenchman began the season on fire, scoring four goals in his opening four games. However, if the 30-year-old fails to find the net at home to Arsenal next weekend, it will be his eighth game without a goal in all competitions.

Fantasy football game www.oulala.com have taken a look at the stats and have revealed exactly where it’s going wrong for Gomis.

Oulala’s stats show that the Swansea City striker was caught offside three times against Villa at the weekend. In total, Gomis has been caught in an offside position 23 times in his opening ten league games this season. Twice as many as any other player in the Premier League. 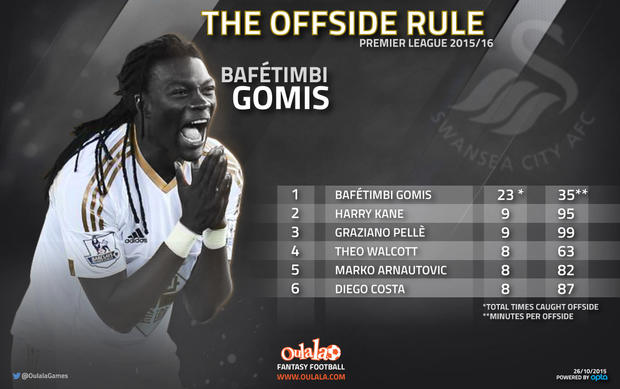 Gomis’ closest challengers are Southampton’s Graziano Pellè and Harry Kane of Spurs. Each player has been caught offside 9 times.

The Premier League’s top six players to be adjudged offside the most this season is completed by Arsenal’s Theo Walcott, Marko Arnautovic of Stoke City and Chelsea’s Diego Costa. All have tallied 8 offsides.

Oulala dissected the data further, braking it down into minutes. The Frenchman is giving away a free-kick for offside at a rate of once every 35 minutes.

In contrast, of the top six, Theo Walcott comes closest, being pulled up for offside every 63 minutes.

Gomis’ knack of finding himself offside more than any other Premier League player will be a cause for concern for manager Garry Monk, as will his drought of goals.