Return of the Keeper

David de Gea made a winning return to football in his first competitive game of the season in Spain’s 1-0 Euro 2016 qualifying victory over Macedonia. The 24-year-old will now be looking to re-establish himself at Manchester United after his proposed move to Real Madrid collapsed on the last day of the transfer window.

The Spaniard has declared himself ready to reclaim his first-team spot at Old Trafford at the expense of Sergio Romero who has deputised during De Gea’s absence.

On a per game basis, the numbers show that the Spaniard dominates the Argentine in all five key areas analysed. 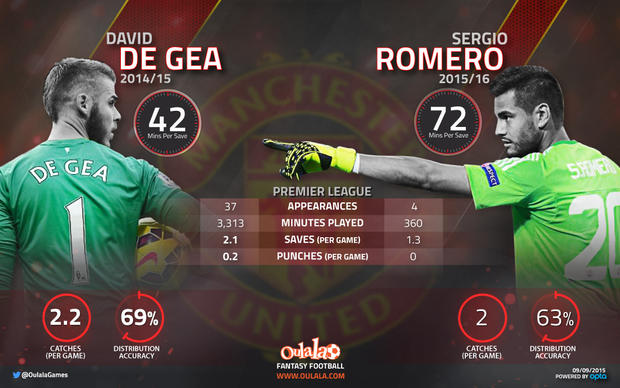 De Gea made more saves per game (2.1 to 1.3) last season than Romero has this term. This resulted in the Spaniard making a save at an average of every 42 minutes. In contrast, each of Romero’s saves this term have come every 72 minutes.

A further area in which de Gea leads is distribution. The 24-year-old successfully found a teammate 69% of the time last season, compared Romero only managing a 63% success-rate this term.

After the Spaniard showed that he was ready mentally for his country, is Louis van Gaal ready to recall De Gea for United’s big clash against Liverpool on Saturday?

Nothing ‘Boring’ about a dependable Morgan »