Records Are There To Be Broken

Which player holds the record for most FPL points in a season?

It was a season Liverpool supporters will never forget. A costly Steven Gerrard slip would gift Manchester City the title in a dramatic conclusion to an unforgettable campaign.

Spearheaded by a strike-force that was dubbed the SAS, the Reds smashed through the 100 goal barrier but it still wasn’t enough to enable them to get their hands on that elusive Premier League crown.

While Daniel Sturridge played his part, it was the spectacular form of Luis Suárez that captured most of the headlines. The Uruguayan striker accumulated 295 points on the Official Fantasy Premier League game, an all-time high and this feat was made even more remarkable by the fact that he was suspended for the first 5 matches, as a result of one of the many on-field controversies that have plagued his career.

Suárez’s accomplishments are summarised perfectly in a tweet by @fplru which was accompanied by the following infographic. 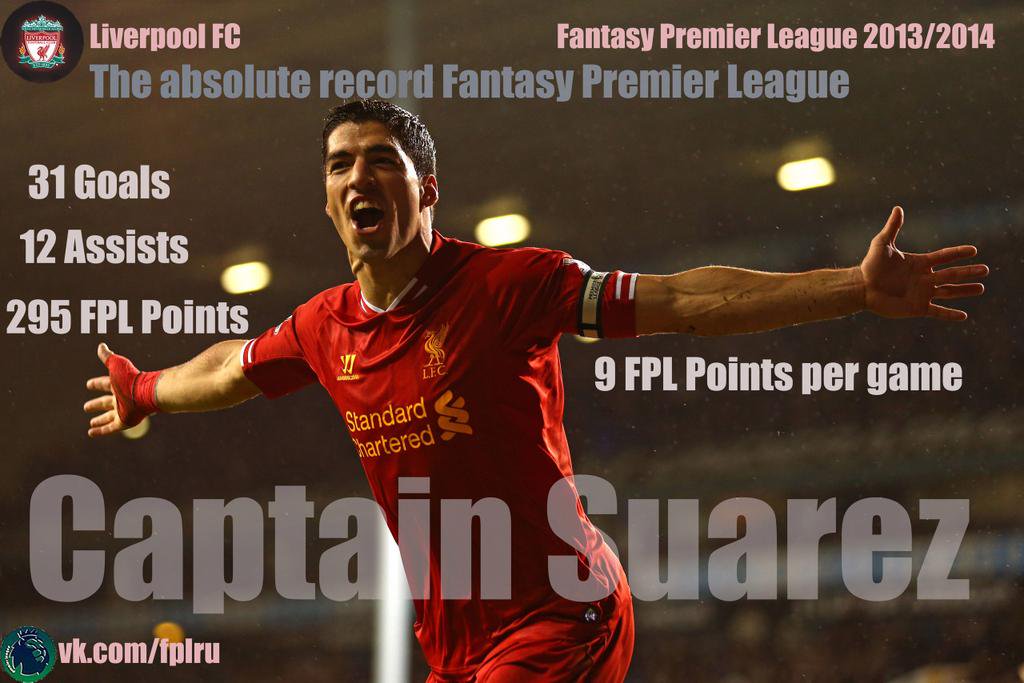 Suárez was simply unplayable and his WhoScored average rating of 8.43 is yet to be bettered in a Premier League season.

Will Mo Salah set a new record for the most FPL points accumulated during the 2017/18 season?

With just 3 games remaining for Liverpool in the 2017/18 Premier League season, Mo Salah sits on 288 points. It would now be a major surprise if he failed to displace Suárez and hitting 300 points still looks well within his grasp.

The Reds’ Champions League 1st leg tie with Roma is likely to be pivotal though. If things don’t go well at Anfield on Tuesday evening, Jürgen Klopp may be tempted to rest his prize asset ahead of the 2nd leg in the Italian capital, meaning that he would sit out Liverpool’s home game with Stoke City on Saturday.

That would leave Salah with just 2 fixtures to break the record – an away match at Stamford Bridge against Chelsea and the Reds’ Premier League finale against Brighton and Hove Albion at Anfield.

However, with Salah only needing one more goal to set a new record for the most goals scored by an individual player in a 38 game Premier League season, it would be a brave man who bets against the newly crowned PFA Player of the Year doing it.

Pep Guardiola assembled an impressive cast and his rampant Manchester City squad proved unstoppable as they clinched the Premier League title with ease.

The signs suggest that they could easily develop into one of the finest sides to grace the Premier League era but they will need to produce on the European stage sooner rather than later if superlatives are going to be thrown at them.

The Citizens look a shoe-in now to register a new record for the most goals scored by a team in a Premier League season having moved on to 98. Chelsea’s target of 103, set in 2009/10, is well within their sights and they will surely set a new standard with 4 games left to play.

City now have 90 Premier League points, so 100 is certainly not out of the question with their remaining 4 matches against sides currently sat in the bottom 8.

It’s been an unforgettable season – something tells me a few of those football ‘record breaking’ books will need their latest editions updating very soon!