BT Sport pundit Michael Owen believes that anything Chris Smalling can do he can match. The former Liverpool and Manchester United striker is quoted as saying: “I could play centre-half when I’ve got Schweinsteiger and Schneiderlin, two full-backs that don’t move and wide players that really do a good shift.”

Fantasy Football game www.oulala.com have compared Smalling’s stats this year to last season to see whether or not Owen’s claims hold firm.

The 35-year-old pundit also pointed out that with “Manchester United this year and Chelsea last year everyone was going on about John Terry’s performances” whereas now “everyone raves about Chris Smalling”.

He continued: “It’s a team game. You’re either a good attacking team or good defensively”

If one were to go by Owen’s claims then the stats should indicate that Smalling has had less to do this season thanks to the cover of Bastian Schweinsteiger and Morgan Schneiderlin.

However, Oulala’s stats show something different. Rather than taking a back seat behind the two full-backs, Smalling’s form indicates that he is in fact slightly busier now than last season.

The 26-year-old centre-back has won more tackles per game this term (1.43), than he did last season (0.93). In total, the Englishman has a tackle success-rate of 51 per cent. This is a marked improvement from his previous 44 per cent. 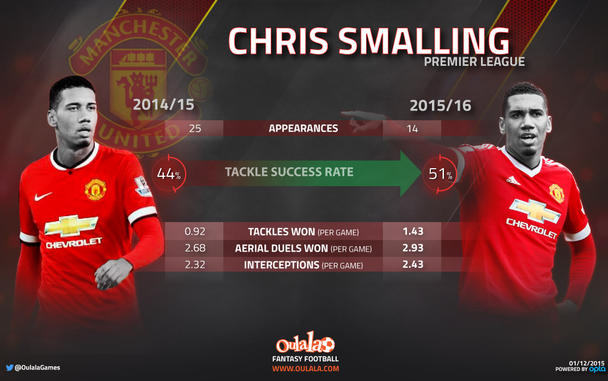 Not necessarily ground-breaking stuff but a far cry from Owen’s claims that Smalling has had little to do so far this term.

This season Smalling has made the most clearances of any United player with a total of 90. Second placed Daley Blind does not even come close with 53 clearances made. Smalling also has the most defensive blocks for United with seven.

Smalling is the only United defender to complete every minute of their home games this season, in which they remain undefeated. United’s next game comes at home to West Ham. West Ham have a decent away record beating the likes of Manchester City, Liverpool, Chelsea and Crystal Palace. Although they have lost their last two outings against Watford and Tottenham, 2-0 and 4-1 respectively.

Will Smalling have an easy time against the Hammers now he has Schweinsteiger and Schneiderlin in front of him? as Owen suggests. Or will the centre-back continue his excellent start to the season with the stats to back it up?

Hazard not the only one lacking punch »