Out of Form or just Dier ?

Tottenham’s Eric Dier has enjoyed an impressive start to the season. The 21-year-old has won rave reviews from all corners, earning himself a well deserved recent call-up to the England senior squad. While at Chelsea, fellow defensive midfielder Nemanja Matic has been identified as one of a handful of players at the club that are not performing to their best.

The pair come head-to-head this weekend as Chelsea travel to White Hart Lane on Sunday in what will arguably be Dier’s sternest challenge so far this season. Oulala have analysed the stats from both players, revealing that the clash may not be as one sided as many would have expected. 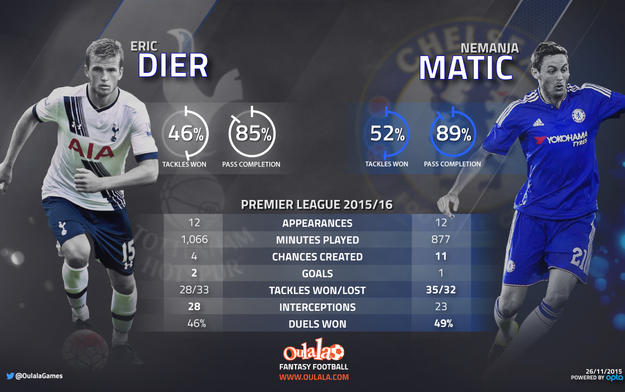 The Serbian has also enjoyed a higher pass completion (89 to 85 per cent), has created more chances (11 to 4) and has won a higher percentage of overall duels (49 to 46 per cent).

Of the seven key criteria analysed, Dier leads for just two. The Spurs player has scored one more goal than Matic (2 to 1) and has made more interceptions (28 to 23).

Chelsea sit 10 points and 10 places adrift of Tottenham in the Premier League table ahead of Sunday’s derby. The battle between Eric Dier and Nemanja Matic looks to be key in deciding which side comes out on top.

« Some things are guaranteed!