One Direction – can Harry surge to the top of the charts?

As the Premier League’s golden boot race hots up, two of the top contenders go head to head on Sunday when Tottenham welcome Manchester City to White Hart Lane.

Opta-powered fantasy football game www.oulala.com focused their attention to two players that have netted 41 Premier League goals between them, Harry Kane and Sergio Agüero, to see how they have measured up throughout the season as they battle it out for the golden boot.

Manchester City’s Agüero began the season on fire. The Argentine hit 14 goals in 15 games before the turn of the year which equated to a goal every 75 minutes. The 26-year-old had a 19% strike-rate and enjoyed a shot accuracy of 61%. 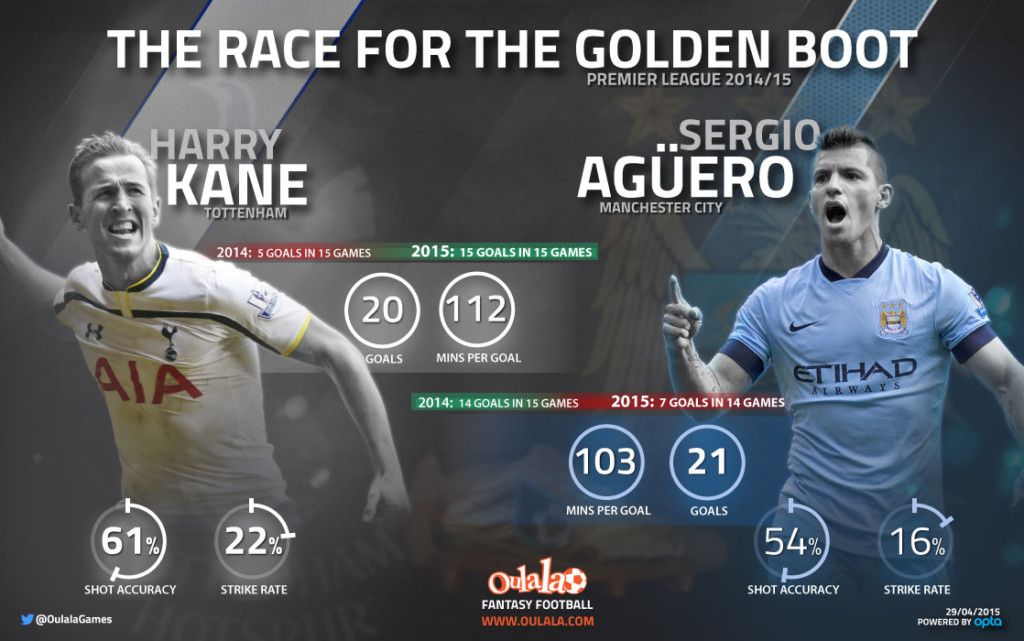 At Spurs Harry Kane had a slower start to his season, having to make do with late cameo appearances in the Premier League up until November. The 21-year-old scored 5 goals in 15 games in the first half of the season, a goal every 181 minutes. A 14% strike-rate and 50% shot accuracy saw Kane trail Agüero in every area.

However, in 2015 it has been a very different story.

Harry Kane has gone on to blow Agüero out of the water this year. The Spurs striker has netted 15 goals in 15 appearances at a rate of a goal every 89 minutes. This has seen his strike-rate improve to 27% in 2015 and his shot accuracy also rise to 68%.

In 2015 Agüero’s goal scoring form has dropped dramatically. With only 7 goals in 14 games, the Manchester City forward’s minutes per goal has fallen to a goal every 159 minutes. Agüero’s strike-rate has reduced to 13% with his shot accuracy also falling to 44%.

The bookmakers have Agüero as the clear odds-on favourite to take the golden boot at the end of the season, seemingly due to the one goal advantage he has over Kane. Judging by the huge swing in form could the experts be wrong?

« Jack of Trumps – the sleeper in the pack