Martial lays down the law

When Manchester United paid AS Monaco a reported £36 million for Anthony Martial, the football world laughed. Who in their right mind would pay such an amount for a 19-year-old yet to prove himself at the top level?

The laughs have quickly quietened with the young Frenchman setting the Premier League alight in his opening two games. Appearing from the bench against Liverpool he scored a goal that Manchester United legend Ryan Giggs would have been proud of. He followed up with an excellent brace in a 3-2 away win over Southampton.

The fee that Manchester United paid for Anthony Martial appears a masterstroke. Especially when you compare his exploits against four of the top strikers in the Premier League last season.

Opta-powered fantasy football game www.oulala.com have taken a closer look at the 19-year-old against Sergio Aguero, Diego Costa, Harry Kane and Alexis Sanchez and the numbers are astonishing. 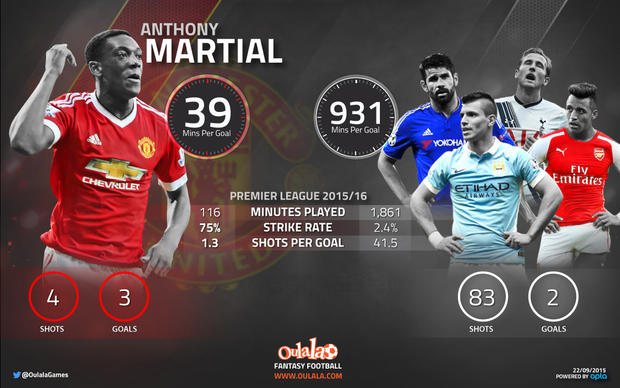 Despite playing just 116 minutes for Manchester United so far this season, Anthony Martial has already netted 3 goals. A goal at an average of every 39 minutes.

In comparison, Aguero, Costa, Kane and Sanchez have played a total of 1,861 minutes in the Premier League this season. However the foursome have only scored 2 goals between them. A shameful average of a goal every 931 minutes.

Martial’s 3 goals have come from just 4 shots, giving the 19-year-old an impressive strike-rate of 75%. In contrast, Aguero, Costa, Kane and Sanchez have totaled 83 shots, resulting in an embarrassing combined strike-rate of just 2.4% this season.

With just 4 shots, the young Frenchman has netted each of his goals every 1.3 shots. The big four have taken 41.5 shots per goal this season.

Sergio Aguero, Diego Costa and Alexis Sanchez cost their clubs a combined total of £105 million. While the £36 million United paid for Martial was quickly labelled a waste of money.

« Harry to rekindle the X Factor

Diego fails to feature in ‘The Dirty Dozen’ »