When you think of Tottenham, one player comes to mind, however there’s another star at White Hart Lane who is putting others in the shade across the whole of Europe. Christian Eriksen has enjoyed an excellent second season at Spurs and www.oulala.com believe it’s time that it’s highlighted exactly why he deserves just as much praise as Harry Kane is getting.

The 23-year-old has featured in all 30 of Tottenham’s Premier League games this campaign, starting 29, and has clocked up the most minutes of game time of any of Spurs’ outfield players, keeper Hugo Lloris the only player to have started every game. A clear sign of the importance to the team Eriksen carries in the eyes of Spurs manager Mauricio Pochettino.

With nine goals, Eriksen sits just behind Eden Hazard and David Silva (11) for the most goals by midfielders in the Premier League. The Dane has enjoyed an impressive 48% shot accuracy overall, to put that into context, deadly Liverpool hit-man Daniel Sturridge has a 45% shot accuracy.

Eriksen has scored the most goals (5) of any player from outside the box in European football. He has taken the most shots of all players from outside the area in the Premier League (57), almost two a game. This puts him third overall in Europe behind only Hakan Calhanoglu of Bayer Leverkusen and Cristiano Ronaldo, but with a better strike-rate than the pair (8.8%). 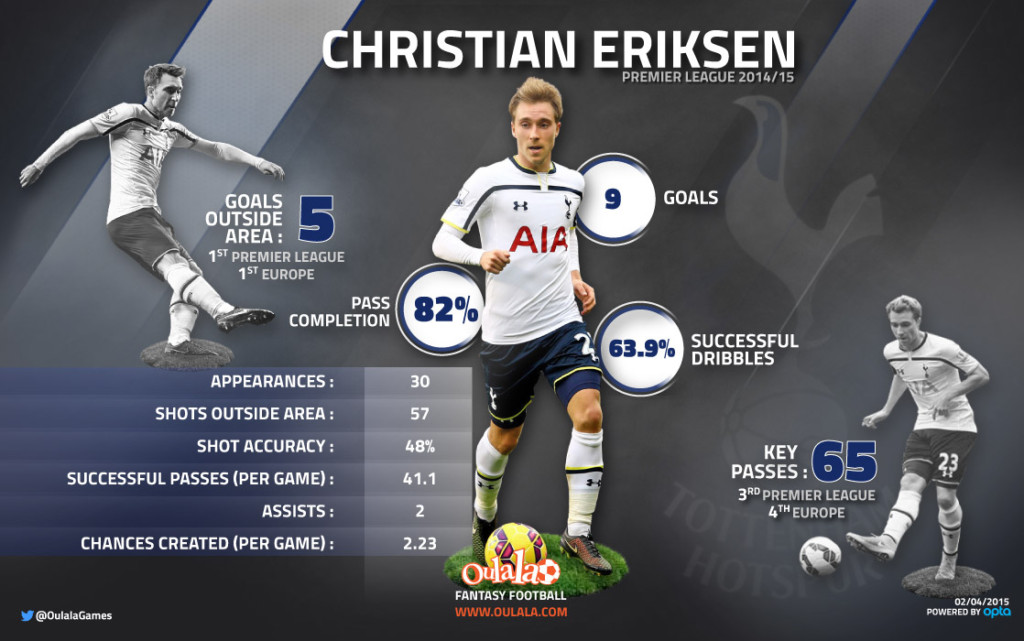 Eriksen’s passing has been just as impressive as his finishing this term. The midfielder has enjoyed an 82% pass completion of an average of 41.1 successful passes per game, eclipsing players such as Liverpool’s Raheem Sterling (80%).

The Dane has also clocked up 65 key passes overall which puts him third in the Premier League behind Eden Hazard and David Silva and fourth overall in Europe with Marseille’s Dimitri Payet claiming top spot.

And then there’s his dominance on the ball. Eriksen has successfully completed an incredible 63.9% of his dribbles in the Premier League, outshining a player renowned for his dribbling, Arsenal’s Alexis Sanchez, who has a 58% success rate.

Despite such an impressive campaign with the stats to back it up it is unlikely that he’ll even feature in the Player of the Year nominations. He is expected to appear in the Young Player of the Year short-list as well as Spurs’ Player of the Year top two, but it’s doubtful he’ll take any individual honours due to one man. But still… what a player!