Return of the Jedi

Do the soaring Eagles need the returning Jedi ?

Crystal Palace captain Mile Jedinak is back after almost three months out following international duty, injury and suspension and now new boss Alan Pardew has the unenviable task of deciding whether to bring the Australian straight back into the starting line-up despite Palace’s current hot streak.

Opta-powered fantasy football game www.oulala.com took a look at the Palace skipper’s stats against the three midfielders that have deputised during his absence to see whether he deserves to walk back in to the team despite their current winning ways. If it ain’t broke don’t fix it… but by all means improve it.

In comparing Mile Jedinak to Joe Ledley, Jason Puncheon and James McArthur in eight key areas the stats speak for themselves. 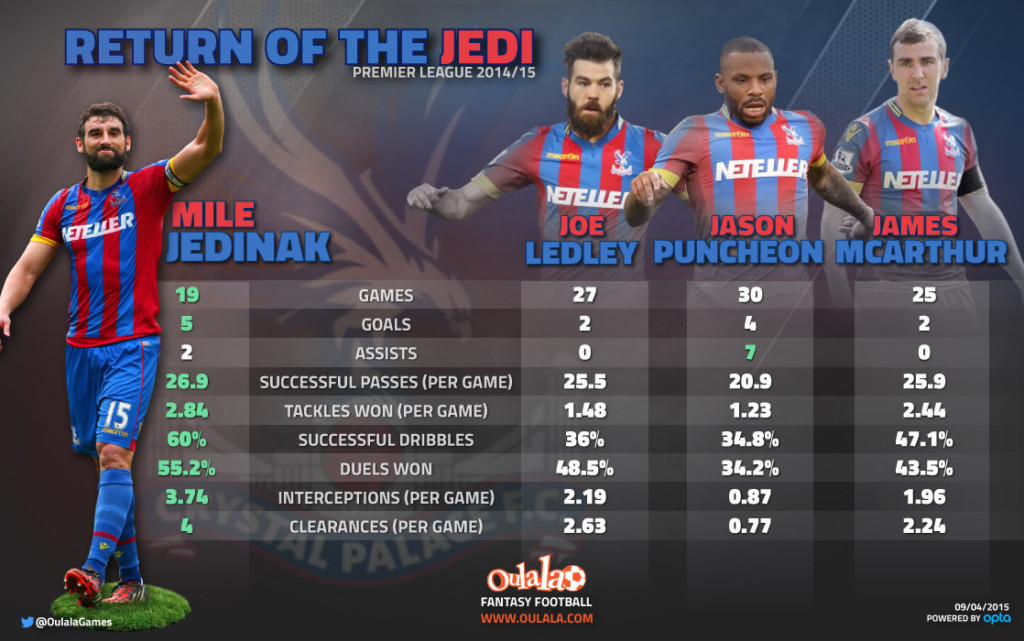 Despite playing far fewer games than the trio, Jedinak is leading for goals and is still the side’s joint top goalscorer with strikers Glenn Murray and Dwight Gayle on five. Jedinak has also racked up more assists (2) than both Joe Ledley and James McArthur (0) but is behind the more attack minded Jason Puncheon (7).

The 30-year-old is regularly criticised for his passing ability, however he has actually made more successful passes per game (26.9) than the other three players. Jedinak has also completed a far superior percentage of take-ons (60%) than the others too.

Best known for his defensive attributes it is no surprise that Jedinak excels for tackles won per game (2.84), duels won (55.2%) and clearances per game (4). The Australian has also made an average of 3.74 interceptions per game, the best average of any Premier League player with more than ten appearances this season.

In leading his teammates in seven of the eight criteria analysed, the stats suggest that Jedinak deserves an instant call-up to the first team for Palace’s away trip to Sunderland this weekend, however with the team currently enjoying Champions League form it will be interesting to see if Alan Pardew reinstates the midfielder.