Harry Kane is going through somewhat of a dry spell at present and the last defender you’d expect him to look forward to facing would be Manchester City captain, Vincent Kompany.

The Spurs striker has failed to score a single goal in 513 minutes of Premier League football this season. Include the League Cup tie against Arsenal and that extends to 603 minutes. Go back even further, to the back end of last season, and the 22-year-old has scored just two goals in his last 15 games for Tottenham, that’s 1,316 minutes of football.

The league leaders began the season with five clean sheets in their opening five games. West Ham were the first side to breach their back-line last weekend, scoring 2. However, that’s still 2 goals fewer than any other side has conceded in the Premier League this season.

One glimmer of hope for Kane, surprisingly comes in the form of City’s captain Vincent Kompany.

Fantasy Football game www.oulala.com have taken a look at the Manchester City centre-back and have unearthed one single stat that will have the Spurs forward licking his lips going into this weekend’s clash.

Amazingly, the Belgian is still yet to win a single tackle in his 5 games and 450 minutes of Premier League football this season. 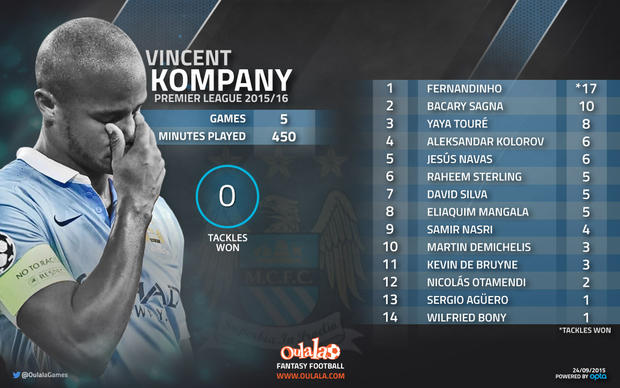 It could be argued that Manchester City have had to do little defending so far this season, especially in their first five games. However, this would not explain the fact that fourteen of the eighteen Manchester City players to have featured in the Premier League have won tackles this season.

Along with their captain, only three other players have failed to win a single tackle for Manchester City this season. Goalkeeper Joe Hart, midfielder Fabian Delph who has only played 21 minutes in the league and 18-year-old forward Kelechi Iheanacho who has only featured for 23 minutes.

Midfielder Fernandinho leads the way for tackles won at City with a total of 17. Right-back Bacary Sagna has won 10 tackles. While midfielder Yaya Touré has won 8.

Even strikers Sergio Agüero and Wilfried Bony have won a tackle each this season.

The Manchester City captain is expected to be passed fit for Saturday’s clash after missing out against West Ham last weekend through injury.

Can Harry Kane finally get off the mark in the Premier League at the seventh attempt against what appears to be a very out of sorts Vincent Kompany?

« Diego fails to feature in ‘The Dirty Dozen’