Jogging James needs to G up

Stats recently revealed that Liverpool’s James Milner has covered the most ground of any Premier League player this season. An impressive 99.90659 kilometres in his opening eight matches.

But how has his overall game fared since his move from Manchester City in the summer and has he filled the void left by talisman Steven Gerrard?

Fantasy football game www.oulala.com have taken a closer look at his stats in the Premier League this season and compared them to Steven Gerrard’s last season.

The figures show, that on a per game basis, Milner is failing to improve on or even match Gerrard’s final season at Liverpool, in a host of key areas.

Last season Gerrard made an average of 43 successful passes per game in the Premier League, 2 more than Milner has achieved this season. The ex-Liverpool captain also managed an excellent pass completion rate of 85% last term, again bettering Milner’s 81% this season. 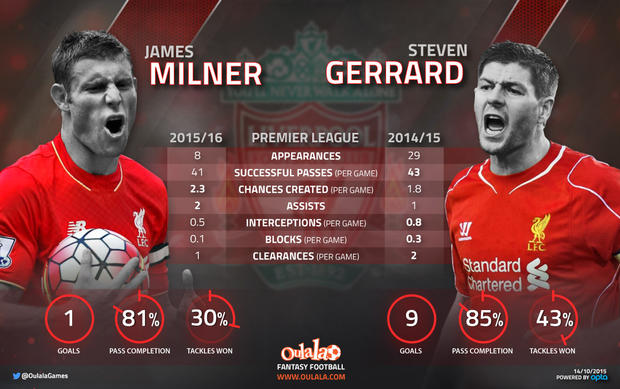 Creatively, Milner has improved on Gerrard. The 29-year-old has created an average of 2.3 chances per game, compared to Gerrard’s 1.8 per game last season. This has resulted in Milner providing 2 assists in his opening 8 games already. Gerrard managed just 1 assist in 29 games last term.

However, as far as goals go, Gerrard is well ahead. Milner has netted just one goal this season. Whereas Gerrard scored 9 goals last term, only 4 of which were penalties.

The stats show that Milner is behind Gerrard in 4 more key areas defensively. Gerrard made a higher percentage of successful tackles (43% to 30%), more interceptions (0.8 to 0.5), more blocks (0.3 to 0.1) and more clearances (2 to 1) per game last season, than Milner has this term.

Are Liverpool missing their long-serving captain?

Did the Reds in-fact make a mistake allowing Steven Gerrard to leave the club in the summer?

Bony to feast as opportunity knocks ? »