Daily Fantasy Sports have really been hogging the headlines over the last few days and so we can’t think of a better time to take a look at the process of selecting forwards for the DraftKings fantasy soccer product. DraftKings are planning to enter the UK market in Q4 2015, having recently acquired a licence from the UK Gambling Commission.

The first thing to note is that the scoring system for forwards is identical to that which is in use for midfielders. This means 10 points per goal, 6 points per assist, 1 point for each shot with an additional point for each shot on target, 1 point per cross and 0.75 points for each foul drawn. A player is penalised 1 point if he is dismissed from the field of play.

There are 3 midweek fixtures scheduled this week so we have ranked the forwards by goals scored during the 2015 MLS season to date, selecting the best 12 from the 6 featured teams:

Of the players listed, 10 of the 12 players feature amongst the highest valued forwards for this particular round with Joao Plata and Lucas Melano being the notable exceptions. DraftKings provide users with a 10 game log for each player and it’s possible to collate the data from this to ascertain exactly where the 12 aforementioned players have been collecting their points in recent weeks: 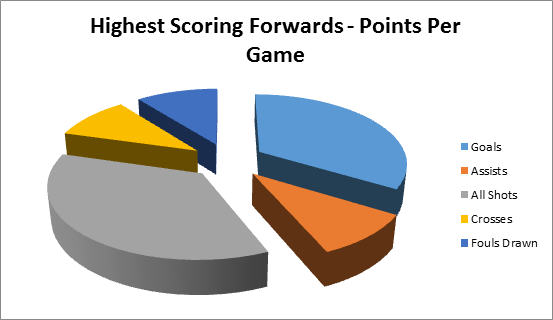 For this data set ‘Goals and All Shots’ are accounting for 70% of the total points forwards are accumulating compared with just over 50% for the midfielders sample we analysed recently. It could therefore be argued that a team’s goal expectancy is even more important for this playing position and the table below highlights the bookmaker projections for the games in question:

At this stage of the season motivation really kicks in. Of the 3 home sides Real Salt Lake are desperate for a result if they are to have any chance of making the play-offs so a case could be made for including one of their forwards, while Toronto and Dallas have really tricky fixtures with neither predicted to fare better than they have been doing on home soil in terms of goal scored.

New York Red Bulls need just a point to clinch the East crown and Mike Grella, priced at $7300, might just be the star to rise to the occasion!

NB. Kindly note that since this article was first published DraftKings have revamped their soccer product, switching from an 8 a-side version to an 11 a-side format as well as making additional scoring amendments.

Jogging James needs to G up »