It’s all happening at FanTeam!

We’ve caught up with FanTeam to find out more about some of the changes that have been taking place behind the scenes recently. We are impressed by what we are hearing so have decided to share with our readers. Enjoy!

FanTeam is a daily fantasy football provider, and the fanteam.com website offers a platform for players to compete against each other in daily fantasy footfall tournaments. The company has been operating under the name WooFBet until the summer of 2015, when a re-branding to FanTeam took place.

Who is behind FanTeam?

The core employees of FanTeam are Norwegian. There are also half a dozen other nationalities represented in FanTeam to guarantee a multi-language support.

What is daily fantasy?

Daily Fantasy Sports (DFS) has exploded to a billion dollar business in USA. The biggest operators (Draftkings and FanDuel) have a combined customer base of tens of millions players in North America. A traditional way to play fantasy football is to manage a virtual team the entire season. DFS changes that entirely, giving you a chance to participate tournaments every week or even every day. There are no season-long commitments and you can make real cash from tournaments, which are over in just few hours. 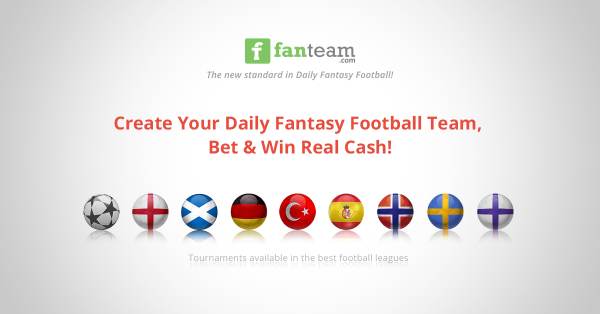 What sports and leagues are included?

Is it difficult to play?

If you have ever played any other fantasy football games then you learn FanTeam in few minutes. The concept is well-known for many people: you select a team of players inside a given budget. Tournament selection is very similar to online poker. There is a lobby, where you can filter tournaments based on different buy-in levels and other properties.

How does the score calculation work?

The score calculation is very similar to the official fantasy.premierleague.com game. In fact, if you are familiar with that game (like millions of people are), you might not see any difference when playing at FanTeam. You can check the scoring rules from here: https://www.fanteam.com/support-center/football-rules

How does the pricing of players work?

FanTeam is using so called dynamic pricing, which means that a price of a player is changing each round based on the opponent. If Arsenal plays at home against Norwich or meets Barcelona at away soil in Champions League, they are in a totally different situation. Big favorites in one match, but big underdogs in the other. Hence, players like Alexis Sanchez might cost 15M against Norwich, but only 6M against Barcelona. This makes the game more challenging and realistic, since the probability for Sanchez to score points is totally different in each example. And his price should change accordingly.

Who decides the live events?

FanTeam does not decide player prices or create live events, but they are acquired from a third party, Oddsmodel AS. This partnership allows us to offer such a wide range of leagues.

Are winners being kicked out?

Quite the opposite! FanTeam offers a platform for players to compete against each other, just like in online poker. We take a small rake from tournament participations, but it is irrelevant for us, who ends up winning the actual tournaments. At FanTeam anyone can play and win as much as they please!

FanTeam.com was launched in mid-August 2015 and the main features are fully up-to-date. We have recently improved graphics in many pages, and most of the upgrading will happen in the engine room from now on.

Is there a mobile version?

We are finalizing a mobile app for both iOS and Android, which we expect to be available before X-Mas. The website is currently not optimized for mobile use.

How do I make a deposit / withdrawal?

At the moment you can deposit with VISA, Mastercard, Paysafecard, Neteller, Skrill. You can withdraw to Neteller and via bank transfer. We are also working with Skrill withdrawal and it becomes available any day now. More deposit and withdrawal methods will be added in the future.

Is there a bonus available?

Yes there is! We offer you a fantastic 200% first deposit bonus up to €500. This means: if you deposit €250, you get €500 on top of the deposit as bonus money. The bonus is a rakeback type, meaning the bonus money is credited to your account when you participate in tournaments. Check the bonus T&C from here: https://www.fanteam.com/support-center/first-deposit-bonus-t-c

FanTeam has both the UK and Malta license. Hence, if you live in EU all winnings are tax free.

Is there a multi-language support available?

Yes there is! FanTeam.com can be viewed in English, Finnish, Swedish, Norwegian, German and Russian languages at the moment. You can approach us to [email protected] in your own language any time.

Are affiliates making money with my losses?

Our affiliates are rewarded based on how much their customers pay rake to FanTeam, meaning how many tournaments they participate in. More they win, the better for affiliate! Players who lose their money quickly won’t generate much rake either. Hence, your affiliate wants you to win as much as you do! If you are interested in becoming an affiliate, please contact [email protected] for more information.

Is it possible for users to create tournaments?

Yes it is! Every FanTeam user can create his/her own tournaments to any of the leagues we offer. You can create single match events or multi-gameweek tournaments and set a buy-in you like. Hence, FanTeam is a perfect platform for you to arrange games between your buddies and decide the rules yourself! You can fully customise the tournament by deciding the game format, the budget, amount of substitutes and pick what games are included.

What is coming up next?

Like written earlier, we are preparing to launch the mobile applications next! We believe they will kick ass and look better than any current game in the market. We are also running ice-hockey with some testing accounts now and getting ready to launch it any day now.

« Is most-fouled Swan a sitting duck at Anfield ?

Feisty Cockerels to feast on Blues »